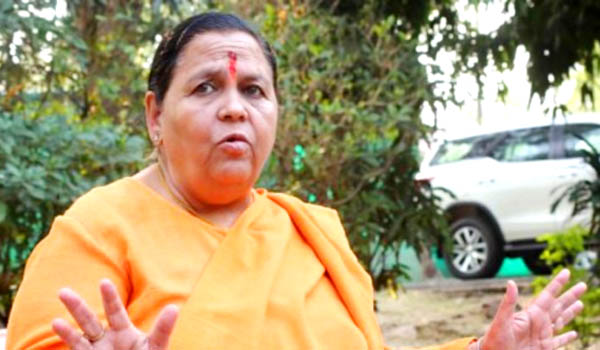 Talking to reporters, she said it takes political courage to make such a decision. A campaign will be organized in Madhya Pradesh on prohibition of liquor. She said that she will also meet Chief Minister Shivraj Singh Chouhan.

Uma Bharti said that liquor mafia takes politicians and bureaucrats in their grip. There are other measures of generating revenue. There can be white revolution here. Raising money at the cost of people's lives is not good. She then reiterated that liquor shops remained closed in the lockdown. No one died due to not drinking alcohol. After this I had proposed liquor ban to two BJP Chief Ministers.

On Thursday, Uma Bharti also appealed to the party's national president JP Nadda on social media to ban liquor. She wrote- 'I make a public appeal to make preparations for prohibition in the BJP ruled states'. She said about liquor ban in Bihar, there is pressure on political parties to win elections. BJP's victory in Bihar proves that due to liquor ban, women unilaterally voted for Nitish Kumar.

Uma Bharti has advised the government that a committee of ministers can be formed to compensate the revenue. Alcohol cannot be banned by pressure or intimidation, people should be made aware. The process of prohibition will have to be started in several phases. She said that I will talk to Shivraj about this. I do not think there can be no prohibition in the state.

On becoming a neighbor of Jyotiraditya Scindia, Uma Bharti said- I am very happy that my nephew has come to me and has become my neighbour. He is a very decent person. Since childhood my affection is on him. There are no Maharaja tantrums in him. If he faces any crisis, I will stand as a shield.