Unparliamentary behaviour of legislators has tarnished image of institutions: Birla 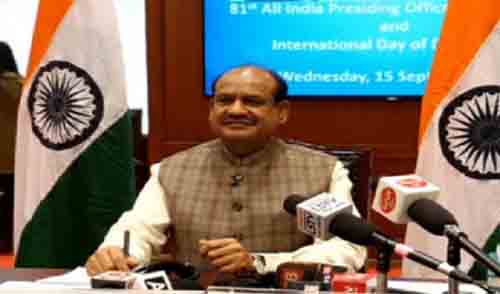 New Delhi, Sep 15 (UNI) Incidents of unparliamentary behaviour of public representatives have increased in recent years which has tarnished the image of the democratic institution, Lok Sabha Speaker Om Birla said on Wednesday.

Addressing the 81st All India Presiding Officers Conference (AIPOC) here, he said, "Credibility of legislatures is linked to conduct of their members and that is why the members are expected to observe the highest standards of discipline and decorum, both inside and outside the legislatures. Privileges of public representatives comes with their responsibilities."

Birla expressed anguish that incidents of unparliamentary behavior of public representatives have increased in recent years, which have tarnished the image of the democratic institutions.

His comments come in the backdrop of the Monsoon Session getting washed out amid Opposition protests over Pegasus snooping row and other issues, and the Rajya Sabha witnessing a scuffle between MPs and marshals on the last day of the session. The session was adjourned two days ahead of schedule amid continuing protests.