Urban body polls will be 2 phase and panchayat 3 phase 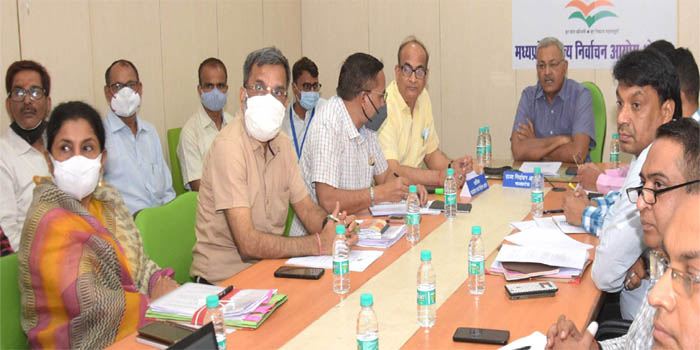 Chronicle Reporter, Bhopal
EVMs will be used in the elections of urban bodies and ballot papers and ballot boxes in the elections of three-tier panchayats. It will take more than 3 months to conduct the elections of panchayats as well through EVMs, as the number of EVMs is limited. Therefore, it has been decided to conduct elections to panchayats through ballot boxes. State Election Commissioner Basant Pratap Singh said this during the review of election preparations with the collectors through video conferencing.
State Election Commissioner Singh said that elections to urban bodies would be conducted in 2 phases and elections to panchayats would be conducted in 3 phases. He said that both the elections have to be conducted simultaneously, so prepare in such a way that there should not be any kind of difficulty. Singh said that if there is any problem, then tell me or the Secretary State Election Commission immediately. He said that after reviewing the sensitive and hyper-sensitive polling stations, the information should be made available to the commission soon. Make full use of information technology in the election process. Give wide publicity to Election Mobile App for urban body elections.
Shri Singh said that according to the new provisions, the account of the election expenditure of the corporators should be systematically maintained. He said that reserve EVMs should be kept safely at designated places only. All collectors should review the availability of election material. Get the maintenance of polling boxes done. Make all the preparations for ballot printing in advance.

Organise meetings with political parties: SEC
Secretary State Election Commission Shri Rakesh Singh said that make appointments of returning and assistant returning officers and inform the Commission. Get the polling stations verified by the responsible officers and get them repaired as per the requirement. Organise meetings with political parties from time to time. Make necessary arrangements by identifying the counting places. Select master trainers for training at district, urban body and block level.
Detailed information regarding EVM, information technology, material management and training was also given in the meeting. Doubts of the District Election Officers were also resolved. OSD Shri Durg Vijay Singh, Deputy Secretary Shri Arun Parmar and other officers were present.