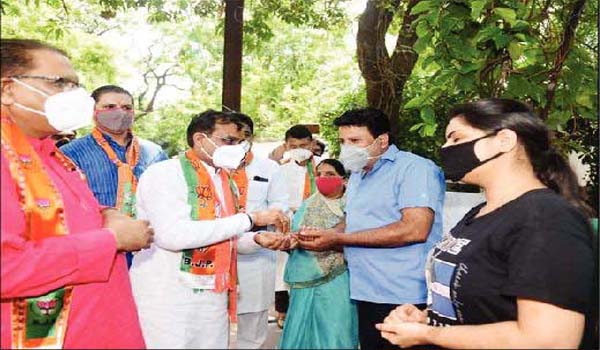 Bhopal. BJP State President and MP Shri Vishnudutt Sharma has called upon the people of the state to get maximum number of vaccines in the vaccination campaign starting from June 21. In this sequence, State President Shri Sharma invited people by going door-to-door to get the vaccine by giving yellow rice to people at ward number 25, Banganga, Bhopal on Sunday. During this, senior leader Shri Umashankar Gupta, District President Shri Sumit Pachauri were present.
Inviting people to get vaccinated, State President Shri Sharma said that I thank the Prime Minister for the campaign launched to vaccinate the citizens above 18 years free of cost across the country. Sharma said that we are going door-to-door, pouring yellow rice and inviting people for the great campaign of vaccination, which the CM is going to start by setting up 7 thousand centers in the state. Telling them that if you want to avoid corona, then you have to get the vaccine. Large number of party leaders and workers were present on the occasion.