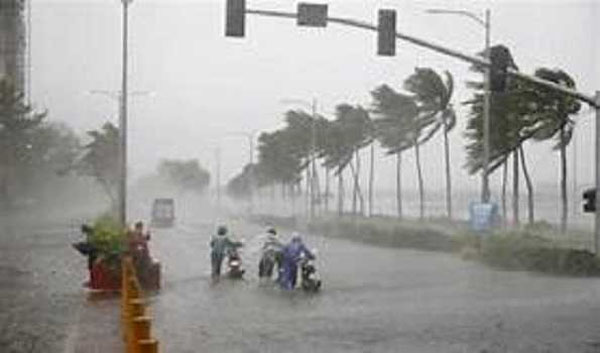 The landfall process marked by gusty winds that touched morethan 120 kmph began around midnight and ended around 0300 hrs
today morning, Met office said.In its update, the met office said the SCS over Southwest Bayof Bengal moved nearly northwestwards with a speed of 11 kmphduring the past six hours and lay centred over north coastalTamilnadu about 50 km north-northwest of Puducherry.

It would continue to move northwestwards and weaken furtherinto a cyclonic storm during the next three hours.Even after making a landfall, it still maintains a wind speed of 85 to 95 kmph as it moved in to the interior areas.Parts of Tamil Nadu and Puducherry, including Chennai, received persistent rains and strong winds, leading to water logging and uprooting of trees.

The Tamil Nadu Government has declared a public holiday for the day in 16 districts of the State under the Negotiable Instruments Act as a special case.

Though rains abated in Chennai and suburbs from midnight, but for a couple of heavy spells in between, the weather remained nippy and gloomy, with strong and blustery winds blowing.

The cyclone has left several suburban areas of Velacherry and Mudichur were completely marooned and resembled an island,
reminiscent of the December 2015 floods.

The SDRF and NDRF personnel used fibre boats to rescue people from these areas as hip-deep water engulfed the households.
People in several shifted to the top floors in their apartments as rain waters entered their premises.

The strongly winds uprootted trees and tree branches in more than 250 places in Chennai city and suburbs and the civic
authorities have cleared a majority of them by acting swiftly.