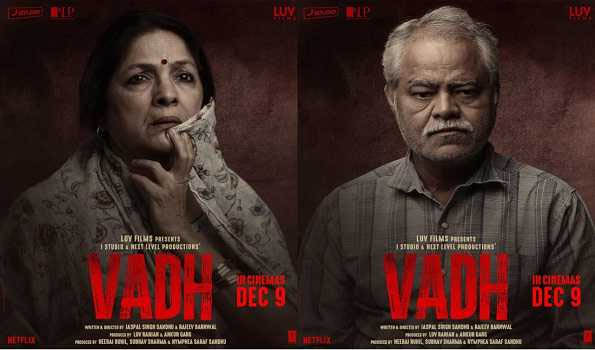 New Delhi, Nov 21 (UNI) The buzz about the upcoming thriller ‘Vadh’ has been building up ever since the release of its intriguing teaser posters.

On Monday, the makers dropped two new characters posters of Sanjay Mishra and Neena Gupta respectively giving us a hint of their character portrayal.

The look of both actors conveys an innocent yet intense look, which has further increased the excitement to watch what roles these powerhouse actors are going to play in the film ‘Vadh’.

‘Vadh’ is written and directed by Jaspal Singh Sandhu and Rajeev Barnwal. The film is presented by Luv Films' Luv Ranjan and Ankur Garg and produced by J Studios and Next Level Productions.

The film will release in cinemas on December 9.