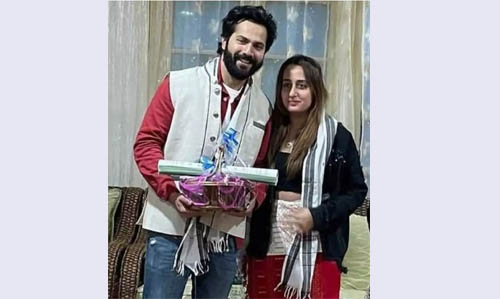 Actor Varun Dhawan has been busy shooting in Arunachal Pradesh for Bhediya with his team and his wife Natasha Dalal is also spending time with him there. Amid this, the couple has gone ahead to contribute Rs 1 Lakh as relief assistance to fire victims of Tirap District in AP recently. Photos of Varun and Natasha posing in traditional attire were shared on social media after they offered relief assistance to those who suffered due to the fire tragedy at Tirap Districts in AP.
A Twitter handle, Dipro Ziro, shared photos of Natasha and Varun being felicitated as they offered their support to the victims of the fire incident in the districts of AP. The couple offered assistance for an incident at Longliang village that happened last month where several lives were affected after a fire broke out. Reportedly, the thatched houses in the village were gutted after the fire. The photos shared by the handle also included photos of Kriti Sanon, Abhishek Banerjee, Amar Kaushik and others from team Bhediya sitting together and chatting.
The couple, who tied the knot on January 24, 2021, was seen smiling away as they posed in traditional attire. While shooting for his film, Varun has been sharing glimpses of the beautiful valleys and hills of AP on his handle. A few weeks back, Varun also went for a boat ride with Natasha and Abhishek and shared photos and videos of the same on social media.
Meanwhile, Varun and Kriti have come together to join Dinesh Vijan's horror film universe with Bhediya. Earlier films in the universe were more of horror-comedies and Bhediya would be an out and out horror flick. The shoot is going on in Arunachal Pradesh. It is directed by Amar Kaushik and produced by Dinesh Vijan.