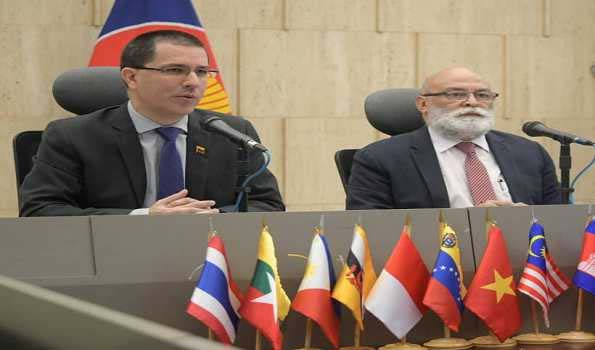 Caracas, Nov 27 (UNI) Venezuelan Foreign Minister Jorge Arreaza has confirmed his country's formal request to join the Treaty of Amity and Cooperation of the Association of Southeast Asian Nations (ASEAN).

Caracas: "We want to express what we did at the beginning of the year in writing, the formal request for Venezuela to be part of the ASEAN Treaty of Amity and Cooperation," Arreaza said during the third day of the virtual ASEAN Conference on Thursday.

He stressed that it would be a very important step for Venezuela "to have a much closer and much more productive relationship with the ASEAN", Xinhua news agency reported.

From a bilateral perspective, Venezuela already maintains "extraordinary relations" with the 10 members of the Southeast Asian bloc, said Arreaza.

The Foreign Minister said that as soon as pandemic restrictions on international flights are lifted, he plans to visit each of the ASEAN members.

The Treaty of Amity and Cooperation is a peace treaty established by the ASEAN founding members in 1976.

India and China were the first countries outside ASEAN to sign the treaty in 2003.

As of July 2009, sixteen countries outside the bloc had acceded to the treaty.

In July 2009, then US Secretary of State Hillary Clinton signed the treaty.