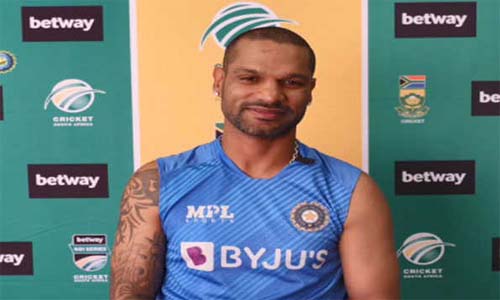 India lost the first match of three-match series by 31 runs and also went down 0-1 against South Africa.

When the main India bowlers were unable to get the much-needed breakthrough in the middle overs, all eyes were waiting to see when captain KL Rahul will hand the ball to the debutant Iyer.

However, that didn't happen, raising questions why India picked Iyer in the playing XI when they didn't want to give the right-arm pacer a chance to prove his skills with the ball.

"He (Iyer) wasn't needed. Spinners did well as the wicket was turning. That's why he wasn't needed," said Dhawan at the post-match virtual press conference.

"When wickets were not falling in the middle overs, the plan was to bring the main bowlers back to get a breakthrough. But couldn't get it. So, towards the end spinners were brought back."

When asked what did he make of the pitch, Dhawan said the wicket was slow and offered a bit of turn as well.

"We had a good start. I feel wicket was slow, it was offering a bit of turn as well so when you are chasing 300 runs then playing shots in the middle is not that easy. The flurry of wickets impacted us as a batting unit," he said.

Meanwhile, Rahul, who is leading India in the absence of Rohit Sharma, said that the team will learn from the defeat against South Africa.

"There's so much to learn. We started really well but couldn't get wickets in the middle," said Rahul at the post-match presentation.

India suffered an early blow while chasing the 297-run target. Aiden Markram struck for South Africa as he dismissed Rahul for 12. The right-hander poked an outside off delivery and got an edge which was collected by wicket-keeper Quinton de Kock.

Dhawan and former captain Virat Kohli slowly steadied the visitors. The duo put up a 92-run stand for the second wicket before Keshav Maharaj bowled Dhawan for a well-made 79.

Soon, Kohli (51) departed, which led to India's batting collapse. The visitors eventually were restricted to 265/8 in spite of Shardul Thakur's unbeaten and maiden fifty.

India will next meet South Africa in the second ODI on January 21 at the Boland Park, Paarl.