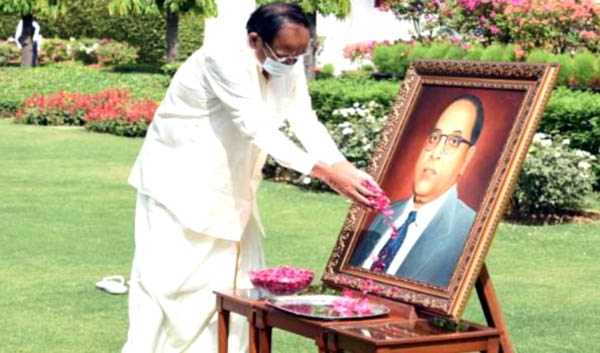 "Remembering the great social reformer, outstanding intellectual and the chief architect of the Indian Constitution, Dr #BRAmbedkar on his birth anniversary today. #Babasaheb was a true humanist who all through his life strove to dismantle caste barriers and social inequalities," one of Naidu's three tweets posted this morning read.

The Vice-President's second tweet said, "#Babasaheb's stellar contribution in drafting the constitution and bridging the gaps of inequality will always be remembered."

Born in 1891 at Mhow near Indore in the then Central Province, now Madhya Pradesh, Dr Ambedkar, fondly referred to as 'Baba Saheb', was the chairman of the drafting committee of the Indian Constitution. He went on to establish himself as a social reformer, educationist, jurist, economist, politician and legal expert of international stature. His thoughts on society, castes, and communities transcend the political boundaries.

On March 31, 2021, the Government of India decided to declare April 14 as a public holiday on account of Ambedkar Jayanti.