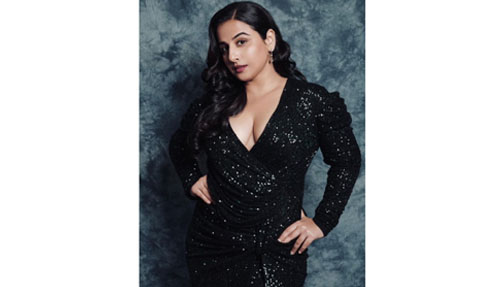 The gorgeous actress, Vidya Balan looks ethereal as she poses in a stunning black, pizzazz gown by the House Of Neeta Lulla. Her clean hairdo is done by Shalaka Bhosle and, illuminated face are aesthetically baked makeup with plum lips done by the celebrity makeup artist Harshal Jariwala.
Overall Vidya looks extremely graceful, styled by Who Wore What. She is tactfully captured by celebrity photographer Anurag Kabbur and captioned the picture, “Acche kapde pehen ke... Ghar pe baitho.”,
Talking about the professional front, Vidya was last seen in a film, titled Shakuntala Devi. The movie also featured Dangal fame Sanya Malhotra, who portrayed the character of Anupama Banerji, daughter of Shakuntala Devi. The film narrated the story of the achievements and the ups and downs in the life of the late mathematician.
Apart from the full-length feature film, she was also seen in her first-ever short film, NatKhat, which told the story of a rural Indian woman, who endured domestic violence in her marriage. The actor will be next seen in Aastha Tiku's Sherni. Helmed by Aastha Tiku, it will also star Vijay Raaz, Sharat Saxena, and Mukesh Prajapati in pivotal characters.