Vijay Sethupathi releases the motion poster for MUDDY, a rare, unique and a never-seen-before experience 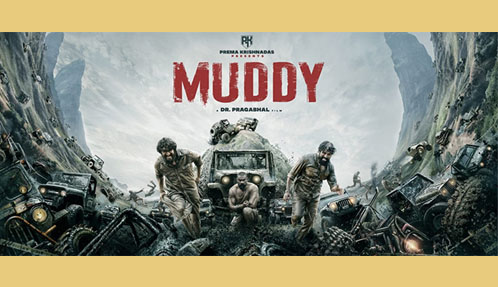 Muddy is India's first off-road mud race movie, an innovative and never-seen-before experience with the vision of a debutant filmmaker, Dr.  Pragabhal who is cinematically exploring the road less travelled by any filmmaker.
Mud racing is a form of off-road motorsport, and it is going to be enthralling to experience this with all the cinematic themes, 'Muddy' is unique and that's what the audiences are on the lookout for. Directed by a newcomer, Dr. Pragabhal and bankrolled by Prema Krishnadas under the banner of PK7 Creations. An adventurous action thriller that will prove to be second to none, born out of the director's love for adventures and off-road racing with which he has a close association .
Dr. Pragabhal has done extensive research that went on for five years, essaying a storyline on the rivalry between different teams. An amalgamation of revenge,family drama,humor and adventure that are weaving threads of this film. He says,"I trained the main actors in off-road racing, we didn't use any dupes. I wanted guys who were adventurous and willing to invest the necessary time and energy for the film."
The director also said in a statement, "The greatest challenge before me was introducing a sport like mud racing to the viewers without losing its thrill and punch."
The concept of mud racing being new to the Indian cinema and it's audiences, the film didn't have any references for the making which also means production wasn't a cakewalk. Mud racing and stunts in the mud were filmed realistically. This will be a new experience to the viewers, he added.
Actors in lead roles spent two years to get real time experience in mud racing. It took more than a year for the director to scout for suitable locations, some unrevealed and interesting locations will be seen in the film. While there are 3 different patterns of Mud Race in the movie that are all choreographed by the director, costly modified vehicles were used to get the real mud race ambience. "Not just for a cinematography framing but for the people around the location to know about what a real off-road 4×4 Mud Race is, I've conducted a Mud Race event for 2 days" added Dr. Pragabhal.
What's interesting to know is no dupes or stunt artists were used to execute adventurous stunts. 'Muddy' is a comprehensive action thriller in mud racing genre. Giving the audiences a great story they can enjoy. The film's technical crew includes KGF fame Ravi Basrur for music, Ratsasan fame San Lokesh for editing ,colorist Ranga and Hollywood fame K G Ratheesh for cinematography.
The teaser for this unique adventure of a film will be out  on 26 February, 2021.
Yuvan, Ridhaan Krishna, Anusha Suresh and Amit Sivadas Nair are the lead artists in the film and Harish Peradi, I M Vijayan & Renji Panicker will be seen in pivotal roles.