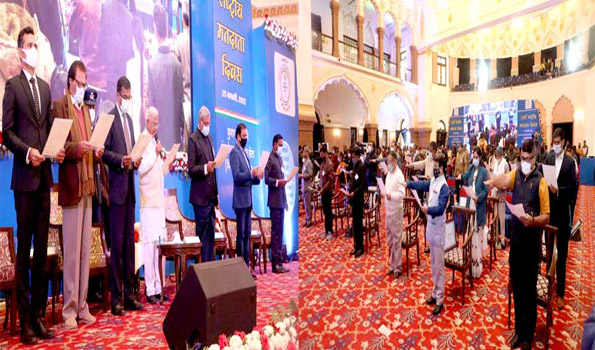 Bhopal: Governor Shri Mangubhai Patel has said that the exercise of franchise in a democratic system is a sacred act of upholding the religion of the nation. It is the most effective way of ensuring accountability of governments and reaping the full benefits of democracy. Citizens are urged to participate in the voting process as conscious citizens of the nation. He has said that every citizen should register his name in the voter list. Also, others should also be inspired to enroll their names in the voters list.
Governor Shri Patel was addressing the 12th National Voters’ Day programme at Kushabhau Thackeray International Convention Centre, Bhopal. He administered oath to the voters. State’s Icon Actors Shri Rajiv Verma and Govind Namdev were also on stage.
Governor Patel said that it is a matter of pride that all of us are voters of the world’s largest democracy. The basis of the success of democracy is free and fair elections and the election of qualified and honest people’s representatives. All citizens should use their right to vote to strengthen democracy. For this it is necessary that the names of the eligible persons should be registered in the voters’ list. Voters should exercise franchise judiciously with awareness. He appreciated the efforts made by the Election Commission for voter education and electoral participation of youth and citizens, SVEEP campaign, voter literacy club, voter awareness forum etc. He expressed happiness over the quality of electoral rolls by the Election Commission and better use of modern information technology, NVSP portal and Voter Helpline App in election management. He also appreciated the easy voting arrangements made for the differently abled, senior citizens etc.
Commissioner State Election Commission Shri B.P. Singh said that the foundation of democracy is vote. The right to vote can be exercised only if the name of the voter is registered in the electoral roll of the area. He said that the process of adding names in the electoral rolls is being constantly simplified by the Election Commission. Voter list revision work is also done on a large scale.