We are in close touch with Bangladesh over disturbing reports of attacks on Durga Puja pandals: India 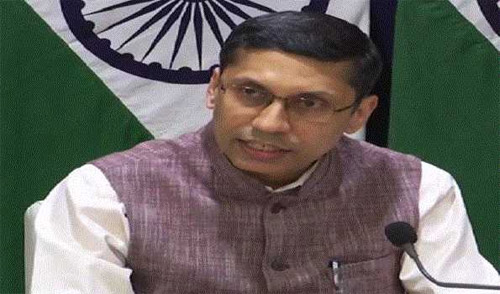 New Delhi, Oct 14 (UNI) India said on Thursday that it has seen the “disturbing reports of untoward incidents” of attacks on Durga Puja celebrations in Bangladesh and has noted that Dhaka has “reacted promptly” to ensure control of the situation, including through the deployment of police and security agencies.

Ministry of External Affairs spokesperson Arindam Bagchi, at the weekly media briefing, said that the Indian High Commission in Dhaka and the consulates are in close contact with the Bangladesh authorities over the incidents, including at the local level, and that the Durga Puja celebrations are continuing in the country, with the support of the Bangladesh agencies and the people of the country.

“We have seen some disturbing reports of untoward incidents involving attacks on religious gatherings in Bangladesh. We note that the government of Bangladesh has reacted promptly to ensure control of the situation, including through the deployment of law enforcement machinery.

“We also understand that the ongoing festive celebrations of Durga Puja continue in Bangladesh with the support of the government of Bangladesh agencies and of course the large majority of the public.

“Our high commission in Dhaka as well as our consulates in Bangladesh are obviously in close contact with the authorities, in Dhaka and at local levels,” he said.

On whether India was in touch with Bangladesh on who were the perpetrators of the attacks, the spokesperson said, “On the investigation aspect of it, we will leave it to the Bangladesh government.”

The comments were in reference to several instances of vandalism at Durga Puja pandals and temples across Cumilla in Bangladesh by extremist mobs in the wake of a rumour circulated on social media alleging besmirching of the Quran at a puja venue.

Shibu Prasad Dutta, general secretary of Cumilla Mahanagar Puja Udjapon Committee, said someone placed a copy of the Quran at a Durga Puja pavilion in Nanua Dighir Par early in the morning when the guard was asleep, bdnews24 reported.

Photos and videos of the Quran were swirling on social media within 6 am. The matter was reported to the chief of the local police station via the 999 national helpline and the police officer subsequently recovered the Quran.

The Hajiganj Health Complex in Chandpur received the bodies of three people believed to have died in violent clashes with police, a doctor on duty, said. But the police did not confirm the deaths linked to violence.

The clashes erupted after police tried to stop assailants who attacked temples. Witnesses said police opened fire at that time.

“We are trying our best to keep the situation under control. The attackers will be identified and face legal steps,” said Harunur Rashid, chief of Hajiganj Police Station.

The government announced a ban on assembly in the area and tightened security with the deployment of Border Guards Bangladesh troops.

In Cumilla, the authorities deployed border guards along with police to maintain law and order after clashes.

Meanwhile, police said they have detained 43 people for inciting attacks and vandalising several Hindu temples in Cumilla and other parts of the Chattogram Range.

Anwar Hossain, DIG of the police’s Chattogram Range, confirmed the arrests during his visit to the puja venue in Cumilla’s Nanua Dighir Par area on Thursday.

The incident was part of a plan to incite tensions, the DIG said.

Police have also detained Fayez, the initial poster of the Facebook video, and are questioning him for information.

"The country is developing, while one quarter is trying to sow instability," said parliamentary whip Abu Sayeed Al Mahmood Swapon during his visit to the scene.