We indulge in politics only during elections: Aditya Thackeray 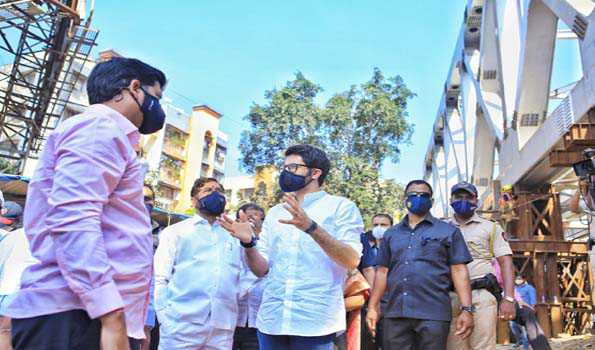 "Let them do that', he asserted while launching the girder for the “Patri pool” in Kalyan this morning.

He said that the Patri Pool project was a mega project, facing many hurdles and was seeing the light of the day now now. Like this, our MVA government will undertake the projects and complete them in the state and ensure development in the state he said.

He further said that the issue of Patri pool was a major issue but the Guardian Minister Eknath Shinde who holds the MSRDC department and the local MP resolved the same effectively.

Every month we undertake the survey and be it the Delies road bridge, MTHL or Coastal Road, Worli Sewree connector, BMLR, and other works are underway,.

On Samruddi Mahamarg, Me Thackeray said that it would likely to be through next year. Once these projects complete, it will give a good picture of the state he said.

Also present for the function was the Thane Guardian Minister Eknath Shinde, MD of the MSRDC Radheshyam Mopalwar, Kalyan MP Dr. Srikant Shinde and KDMC Mayor Vinita Rane and others.

Speaking on the occasion Dr. Shinde declared that the bridge would be ready within the next month for traffic and will be a new year gift for the citizens of Kalyan-Dombivili.

Meanwhile, the authorities have taken mega block for two days on Saturday and Sunday for the launching of the huge girders over the railway tracks. Additional arrangements of the bus services have been made by the administration to clear the traffic during these two days.

The girder is 76 mts long and a metal one and is being placed over the railway tracks.

The bridge itself was constructed way back in 1914 and was rendered unfit for traffic and demolished and the work on the same was initiated in 2018 but faced several hurdles which were resolved by the intervention and series of meetings by the Kalyan MP Dr. Shinde closely followed the status.