What will happen after lockdown 3.0 ? : Sonia asks Centre 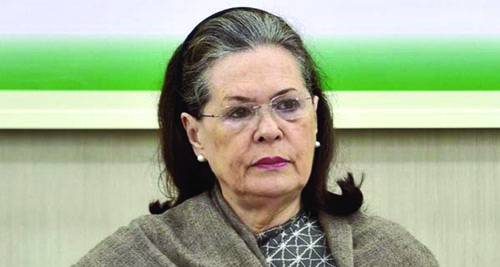 Congress president Sonia Gandhi, on Wednesday, questioned the Centre over the criteria it is using to judge how long lockdown will continue. “After May 17, what? And after, May 17 How? What criteria is the government using to judge how long the lockdown is to continue,” Ms Gandhi said while speaking at a meeting of chief ministers of the Congress-ruled states and senior party leaders.

Besides Chief Ministers, former Prime Minister Dr Manmohan Singh, former party president Rahul Gandhi, P Chidambaram, Jairam Ramesh, KC Venugopal, Randeep Singh Surjewala among others attended the meeting. Mr Surjewala said that the Congress president holds the meeting to review how states are tackling COVID-19 and the lockdown and assess their needs. “We thank our farmers, particularly of Punjab and Haryana, for ensuring food security by bumper wheat crop despite all odds”, Ms Gandhi said in the meeting.

Addressing the meeting Dr Manmohan Singh said that the party president has already pointed out the issue and the Chief Ministers need to deliberate and ask the strategy of Union government to get the country out of lockdown. “We need to know, as Soniaji said, what will happen after lockdown 3.0”, Dr Singh added. “The central piece of strategy to fight Covid-19 is to protect the elderly as also those who are diabetic and with heart condition”, said Mr Gandhi while talking at the video conferencing. Rajasthan Chief Minister Ashok Gehlot asked until extensive stimulus package is given, how will states and the country run? “We have lost Rs 10,000 crore of revenue.

States have repeatedly requested Prime Minister for a package, but we are yet to hear from Union government”, he added. Addressing the leaders, Punjab Chief Minister Capt Amarinder Singh suggested setting up of two committees and added, “one to strategise on how to come out of lockdown and other on economic revival”. “Concern is people sitting in Delhi are deciding on classification of zones without knowing what’s happening on the ground”, he charged. While talking,

Chhattisgarh Chief Minister Bhupesh Baghel said that states are facing dire economic crisis. “They need to be provided immediate assistance. Chhattisgarh is one state where 80 per cent of small industries have restarted and nearly 85,000 workers have returned to work”, he added. Puducherry Chief Minister V Narayanasamy complained that Union government is deciding on zones without consulting the states creating anomalous situation.