Who will replace Gehlot in Rajya Sabha? 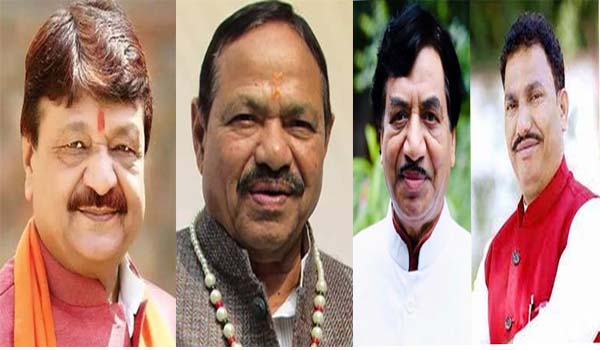 Khilawan Chandrakar, Bhopal
One of the 11 Rajya Sabha seats in Madhya Pradesh has fallen vacant after former Union minister Thaawarchand Gehlot's resignation after appointment as governor. In the Rajya Sabha elections going to be held very soon, this seat will go to the BJP on the basis of strength in the assembly. So uncontested election is certain. In such a situation, the important question is, which of its leaders inl the BJP will be given a chance on this vacant seat? The names the leaders emerging rapidly in the current situation include BJP's National General Secretary Kailash Vijayvargiya, former MP Krishna Murari Moghe, former Union Minister Satyanarayan Jatia and former Ujjain MP Chintaman Malviya.
From the point of view of regionalism, it seems certain that the vacant posts of Rajya Sabha will be filled from the Malwa region of the state. Similarly, another important fact can also be that after the resignation of Gehlot, none of the remaining 11 Rajya Sabha MPs from the quota of Madhya Pradesh are from the Scheduled Castes or the Backward Classes, in such a situation, the surety of making a Rajya Sabha member from this class is visible. Anyway, 2 members Sumer Singh Solanki and Sampatiya Uike are representing the Scheduled Tribes. The party leadership is also less likely to send a BJP leader from any other state to the Upper House from the quota of Madhya Pradesh because already Mubashar Javed Akbar and Dharmendra Pradhan have been sent from here. In such a situation, there is complete assurance of giving priority to the leaders of the state itself.

Kailash Vijayvargiya
Vijayvargiya, senior BJP leader of Malwa zone, is not a member of any house yet. After being a minister in the state several times, he is currently the National General Secretary of BJP and the organization in-charge of West Bengal. By the way, he is also likely to contest by-election from Khandwa Lok Sabha seat. Despite this, there is a high possibility of sending him to the Rajya Sabha.

Krishna Murari Moghe
Krishna Murari Moghe, who came into the mainstream of politics as the pracharak of the Sangh, has been the mayor of Indore as well as being a former MP. If the RSS uses the veto power, then as a member of their upper house, there may be a chance to come back into the mainstream of the party. Anyway, he is being considered a candidate for the Khandwa by-election.

Satyanarayan Jatia
Jatia, a former Union Minister and a prominent leader of Scheduled Castes, who has been a Lok Sabha member for 5 times from Ujjain, has also been a Rajya Sabha member. He was not sent to the Rajya Sabha for the third time. Because now there is a possibility of making a Dalit leader a Rajya Sabha member from Malwa region itself, so despite his age, his name can be seriously considered.

Chintaman Malviya
Former Ujjain MP Chintaman Malviya, who was a professor in the college, has also emerged as a natural contender for the post. For some reason, he was not given ticket by the party in the last Lok Sabha elections. But now when the occasion has come that a Dalit BJP leader from Malwa itself has to be sent to the Upper House of Parliament, the party leadership can seriously consider his name also.