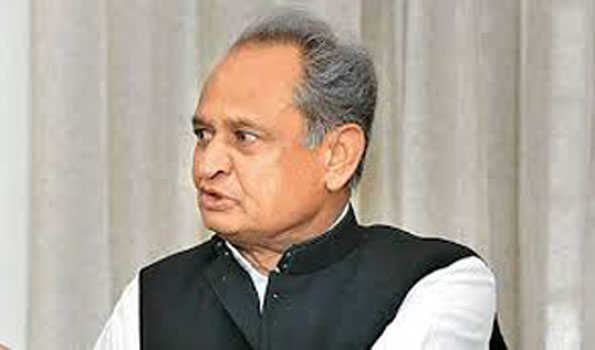 New Delhi, Sep 21 (UNI) Ashok Gehlot on Wednesday said he will only file nomination if he is asked to do so by the party for the Congress presidential poll, which will likely to be contested first time in 22 years.

Gehlot tried to make it clear that he is a Congress loyalist and will continue to serve as the Rajasthan chief minister, or whichever post the party finds him suitable for.

The 71-year-old, whose name has been among the front-runners for the top Congress post as Rahul Gandhi is unlikely to stake claim, was in Delhi to meet Congress interim president Sonia Gandhi.

Asked about the presidential election in the party that has garnered unprecedented importance in the face of key and long queue of exits, Gehlot said, "I am fortunate that I have the affection and trust of Congress party workers across the country. I will file nomination if I am asked to do so. I am here to serve Congress," Gehlot said.

He said he is ready to serve the Congress wherever he is useful - in Rajasthan or in Delhi.

"I am holding the responsibility as the CM and will continue to do so... It is on me, I have to work for the Congress. I will be wherever I am useful for the party, I will be ready," he said.

Gehlot added that posts were not important for him, and if it would be up to him, he would just walk alongside Rahul Gandhi in the Bharat Jodo Yatra without any post.

His comments about the Yatra came on the back of Sachin Pilot joining the Kerala leg of the party's nationwide foot march to revive its fortune.

Pilot was Gehlot's key adversary to the chief ministerial post in Rajasthan in the last Assembly elections and Delhi had to step in to give the state its CM as a face off between supporters of both leaders was evident.

Gehlot will head to join the Bharat Jodo Yatra on Wednesday evening. According to sources he is likely to try convince Rahul Gandhi to take up the post of party president again after his 2017 to 2019 stint.

Asked about the possibility of a contest with Shashi Tharoor, Gehlot said "a contest will be good for internal democracy of the party".

Nominations for Congress presidential polls have to be filed between September 24 and 30.

If there are more than one candidate, the election will be held on October 17 and the results will be declared two days later.

Last time there was a contest for the top Congress post was in 2000, when veteran Jitendra Prasada lost to Sonia Gandhi.