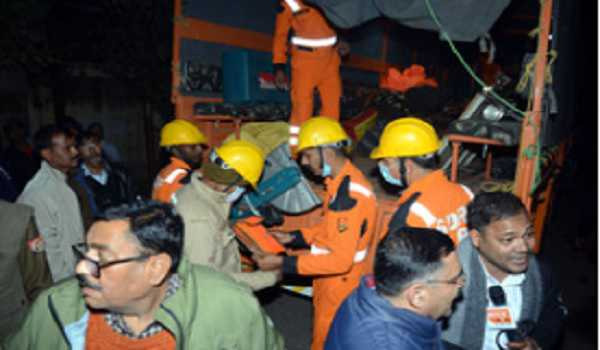 Lucknow, Jan 25 (UNI) A woman died on Wednesday as 14 people were rescued safely during overnight rescue and relief operations from the debris of a residential building which collapsed on Wazir Hasan Road in posh Hazratganj area of state capital Lucknow, senior administrative officers said.

On the directive of Uttar Pradesh Chief Minister Yogi Adityanath a three-member committee has been constituted to probe the incident. The committee will identify the persons responsible for the incident and submit its report within a week.

Director General of Police (DGP) DS Chauhan said that two persons were rescued safely around 5 am and are being treated at the hospital. "A lady Hairat (85) died after reaching the hospital. She was having crush injuries. She sustained injuries as some heavy object fell on her during building collapse," he said.

He said that efforts were being made to rescue a woman, who is still trapped under the debris. "One more woman is said to be trapped in the rear side of the building and efforts are on to rescue her. So far officially there is only one casualty. There is an unconfirmed report that a bank employee, who had come to meet a client, and his associate are also trapped in the rear side. We are trying to trace them," he said.

The DGP said that the NDRF and SDRF team along with police, fire service, PAC and officers are present on the spot. "We are trying to rescue the maximum number of people. The main problem is being faced due to debris. The operation could extend more than 18 hours. An FIR is being drafted," he said.

He said that a three-member committee including Divisional Commissioner Roshan Jacob, Additional Commissioner of Police (ACP) Piyush Mordia and Chief Engineer of PWD has been constituted. "The committee will probe the cause of the incident. Poor construction, which could be seen from the naked eyes, may be the reason behind the incident," he said.

Chauhan said that a total 12 teams of NDRF and 12 of SDRF are involved in the rescue operation. "In addition to this 4 companies of PAC have been deployed for law and order," he said.

Meanwhile, Deputy Chief Minister Brijesh Pathak visited the Civil Hospital and inquired about the health of the people admitted there.

It may be noted that several people were trapped under the debris when Alaya Apartments on Wazir Hasan Road collapsed late on Tuesday evening. Initially the Deputy Chief Minister Brijesh Pathak had said that three bodies had been recovered from the rubble though later DGP Chauhan and Principal Secretary (Home) Sanjay Prasad claimed that no casualty had been reported till late night.