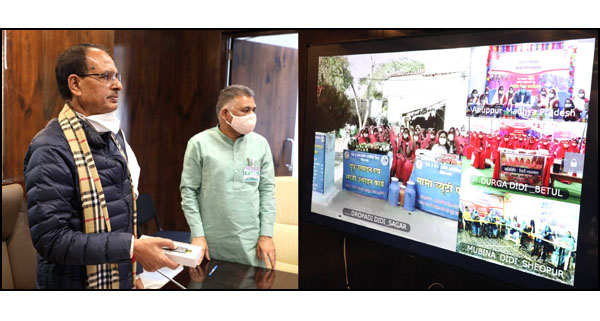 This year, an amount of Rs 1400 crores is being provided to women for their economic activities. Simultaneously, it has also been decided that products of women self-help groups will be one part of government purchase. Goods manufactured by them will also be placed in “malls” in cities to provide them market and encourage them.

Chief Minister Shri Chouhan said that currently 35 lakh sisters are associated with self-help groups in Madhya Pradesh and are successfully conducting various types of economic activities. This time these sisters have been given the task of stitching school uniforms. Along with this, they are also producing “Ready to Eat” nutrition diet at many places. We have to provide essential training to 30 lakh more women this year and connect them with self-help-groups. These women will assist in making the 'local to vocal” and to build an Atmanirbhar Madhya Pradesh.

She went to brief IAS officers in Mussoorie

Mobina Behn of Bismillah Self-Help Group of Pandola, Sheopur said that the women of her group are engaged in different economic activities and each member is generating a monthly income of Rs 15 to 20 thousand. She obtained Rs 50 thousand from the bank first and Rs two lakh later which she has repaid. Now a loan of Rs three lakh has been approved. Mobina has also been gone to Mussoorie to brief IAS officers on self-help groups.

Women should move ahead

Durga Pawar, member of Palak Aajeevika Self Help Group of Rathipur village in Betul district, told Chief Minister Shri Chouhan that earlier she had taken a loan of Rs. 50 thousand and now she has taken a loan of Rs. 5 lakh. The group is engaged in production of milk, vegetable, mask making and sewing. Now there is a plan to produce animal food. The Chief Minister said that the women should keep moving forward like this and bring glory to the state.

“I had never see a cheque before, now I am issuing cheques”

Draupadi Kurmi of Laxmi self-help group of Aameth village in Sagar district told the Chief Minister that she started her work with a buffalo purchased for Rs 20 thousand and has now bought four buffaloes worth Rs 50 thousand each with bank loan. Today, she is earning Rs. 1500 per day. She told the Chief Minister that “earlier I had not seen how a cheque looks like, today I am issuing cheques.”

During an interaction with Usha Rathore, of Anuradha self-help group of Anuppur district, Chief Minister Shri Chouhan said that women should not only make the village and Madhya Pradesh self-reliant through economic activities but also develop villages by participating in rural leadership.

Usha told Chief Minister Shri Chouhan that she took loan of Rs one lakh from the bank first, then Rs two lakh and now Rs three lakh. Her group engages in activities like agriculture, running hotels, egg shop, grocery store, vegetable production, tractor operation etc. and earns Rs 20 to 25 thousand per month. At this, Chief Minister Shri Chouhan congratulated them and said that “this is an example of Atmanirbhar Madhya Pradesh”.

Panchayat and Rural Development Minister Shri Mahendra Singh Sisodia said that the government is extending maximum assistance to empower self-help groups in the state. Our aim is to ensure that every woman in self-help groups earns a monthly at least Rs 10 thousand.