Women of our country have come a long way at national & intn'l level: Naidu 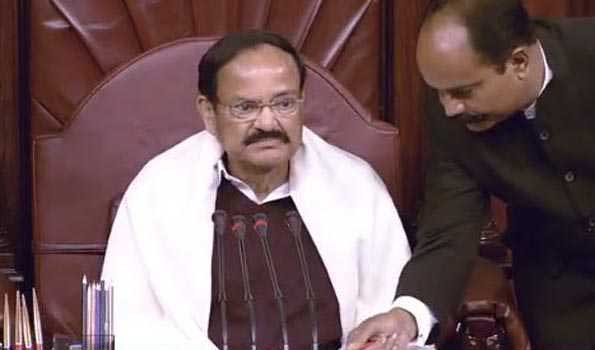 New Delhi, Rajya Sabha Chairman M Venkaiah Naidu on Friday lauded the contribution of women, including Members of Rajya Sabha, across the country saying they have come a long way in making their presence felt at the national and international level.Appreciating their journey, he said that from being an affectionate and caring mother to a fighter jet pilot, from heading an Multi-national companies to scaling insurmountable mountain peaks, women can be seen challenging the prevalent prejudices and stereotypes and successfully overcoming them.'Be it politics, poetry, sports or business, women have excelled, whenever they had an opportunity. It is our duty to keep up this momentum and continue building upon the progress achieved by women', Mr Naidu said.
Speaking further on this issue, the Upper House Chairman exhorted the need to change the mindset of society supplemented by better healthcare, educational and employment avenues for women.

'Women should be provided with enough opportunities to serve as legislators in the State Legislatures and Parliament. They also need to be included and consulted in every fora for policy formulation and implementation', he added.This will ensure outcomes which are sensitive to the needs of women and provide ample opportunities for them to prosper and contribute to nation building, the Chairman further added.Referring to the long history of women’s participation in India, Mr Naidu said, 'Since time immemorial, India has had a rich and vibrant history of honouring, respecting and celebrating women and acknowledging their invaluable contribution to societal development. Women used to play a significant role in economic and public affairs. Our philosophical discourses have also been enriched by the works of women sages like Lopamudra, Gargi and Maitreyi”.

March 8, is International Women's Day, a day to celebrate the social, economic, cultural and political achievements of women throughout the world and honour their resolute determination and incessant efforts to achieve equality, justice and economic development, he said.The UN Theme for International Women's Day this year is: "I am Generation Equality: Realizing Women's Rights", which is aligned with UN Women's new multi-generational campaign, 'Generation Equality', which marks the 25th Anniversary of the Beijing Declaration and Platform for Action adopted in 1995 at the Fourth World Conference on Women held in Beijing, China.