Work going on at fast pace on Mahakal expansion 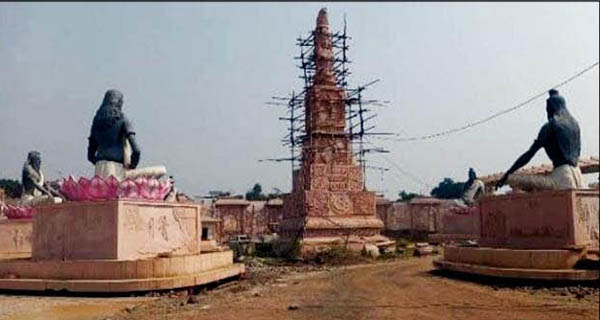 The work of Mahakal expansion plan is going on at a fast pace. The first phase of the work being done in three phases is almost complete. The pace of the second phase has also accelerated now. In the first phase, the Mahakal forest area has been expanded in which the idols of religious, Sanatani and sages have been installed. A grand lotus tank has been built inside the forest.
Prime Minister Narendra Modi is going to visit the city of Mahakal for the first time to inaugurate the first phase of Mahakal expansion plan. Due to which, efforts are being made to complete the remaining works as soon as possible. Before the Prime Minister, the President of the country, Ram Nath Kovind, is coming on May 29. The President also has a program to visit the Mahakal temple.
Attractive electrical decoration, smart lighting work has been done in Mahakaleshwar temple. This is done with sound by digital multiplexing controller, which changes the colour of the lighting according to the beats of the bhajan in the evening at Shri Mahakaleshwar temple. The devotees who come to Shri Mahakaleshwar temple during the night can get to see a wonderful form of Shri Mahakaleshwar temple.

Restoration of Rudra Sagar
Renovation work of Rudra Sagar under Mahakal temple is in progress. The deepening of the first and second phases of Rudrasagar has been completed. Apart from this, the construction work of gabion wall and Rusting Island is also being done to promote aquatic life under the project. With the completion of this project, Rudra Sagar will be rejuvenated.

Preparations for PM visit
The management of the proposed visit of Prime Minister Narendra Modi on June 14-15 will be given to the private event agency. For this Ujjain Smart City has invited proposals from major agencies across the country. On May 20, these companies will give a presentation with the proposal. Modi will visit Ujjain for the first time as Prime Minister. He will address the public meeting after visiting Mahakaleshwar and inaugurating the newly constructed corridor and Darshan Complex. This programme of Modi will be publicized in the country and abroad. Simhastha exhibition will also be organized. The prime minister will come to the police line helipad by an army helicopter. From here he will be taken to the Mahakaleshwar temple.
Mahakal Fourlane Road is being prepared for the Prime Minister. The PM can be taken from this route to the temple through the museum road located near Shankhdwar. Wherever the Prime Minister goes, special cultural programs will be organized. The Department of Culture has a Triveni Museum in the city. Through the Department of Culture, programs based on Shiva Shakti and Shri Krishna can be done in the temple premises. The decoration exhibition of Mahakal Corridor will be organized through the Event Management Agency. According to Collector Ashish Singh, the agency will be selected on the basis of the proposal and presentation of the agencies.