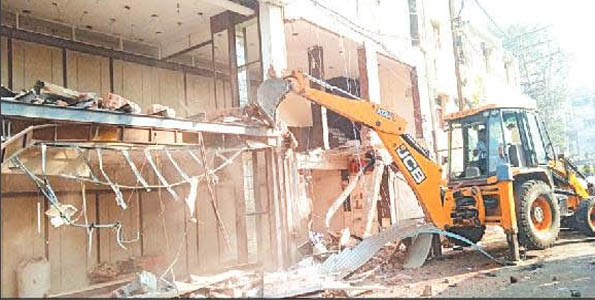 Chronicle Reporter, Ujjain
Regarding the work to be done in the second phase of Mahakal expansion, on Wednesday morning, the administration and the corporation team started the work of removing 5 houses of Bada Ganesh Mandir Marg with the help of JCB. Nine houses are to be removed on the road, out of which one house was demolished earlier, now three houses and are left.
After the formation of Shri Mahakal Mahalok, in the second phase, the administration is engaged in the process of completing the construction work around Bada Ganesh Temple and part of Rudra Sagar at a fast pace. Nine houses near Bada Ganesh temple were to be removed, but a few days back 8 landlords brought a stay order from the court to stop the administration and corporation's action. Due to non-availability of stay at a house, the demolition was completed on that day by Administrative Officer Kalyani Pandey. The administration presented its side in the court on the stay order. As soon as the stay order was over on Tuesday, on Wednesday morning, the administration and the staff of the Municipal Corporation reached to remove 5 houses near the Bada Ganesh temple. The corporation team started its work at 8 am. After the court rejected the stay, the houses were vacated in the night itself. It is being told that hearing is yet to be held on the stay of three houses, whose decision will also be taken in a day or two, the process of removing them will be completed. In the second phase of the Mahakal expansion plan, a four-lane road will be made in front of the Bada Ganesh temple. In the same part, the work of laser show will be started along with the construction of the bridge in Rudrasagar. The shops around Bada Ganesh Mandir have already been removed. The administration has to complete the work of the second phase in one year. By 2024, Baba Mahakal's court will be visible in grand form. It may be noted that on October 11, the first phase of Shri Mahakal Mahalok was inaugurated by Prime Minister Narendra Modi, after which 30 to 40 thousand people from country and abroad are continuously reaching to see Mahakal after the completion of the work of the second phase. The number of devotees may increase further. The number of people reaching Shri Mahakal Maha Lok on Saturdays and Sundays remains more than one lakh.