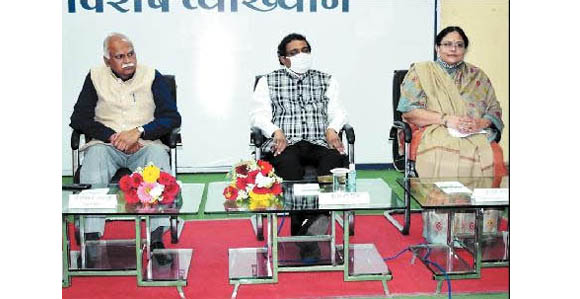 Chronicle Reporter, Bhopal-On the occasion of World Hindi Day, Makhanlal Chaturvedi National   Journalism and communication University, Bhopal organised an event in which vice chancellor of the university Prof. KG Suresh said that university has planned to create a ‘Bhasha Prayogshala’ (Language Laboratory) in the new campus. By which the students will not only improve the quality of language but also make them rich and powerful.

While addressing the event he also said, “instead of taking words from other languages we should take words from Indian languages”
Rakhi Tiwari, head of journalism department, said that Hindi journalism is steadily increasing in the digital platforms after the development of Unicode font.
Assoc. Prof Lokendra Singh threw light on the importance of Makhanlal Chaturvedi in the development of Hindi journalism in Madhya Pradesh.

Online streaming for students at home

The program was organised by the department of journalism. Students of the department, Vidhi Singh and Hitesh Rajpurohit also shared their thoughts on world hindi day. Program was hosted by their peer student Shubhendu Bhumandal.

The Hindi Writers’ Association of MP, Bhopal, organised the extempore speech competition for children from class 9 to 12 in online mode to celebrate World Hindi Day. The four subjects of the competition were Changing Lifestyle from Corona, Favourite Book, Gomata and Environment. During this online competition, student Vibhor Sameer Srivastava appealed to all mankind to save the environment while choosing the subject of environment. Another student Khare chose to talk about global warming while choosing the environmental theme.

At the same time, Asmi Sharma chose the subject of Gomata and explained the importance of cow dung and cow urine. Kusum Panth tells the story of the favourite book ‘Alchemist’ and discusses a strong will to fulfill life’s goals and dreams. Mehak chose the economic, mental changes in the person due to corona, choosing a lifestyle theme from Corona and everyone looked at it. Arpit Bundela told about the environment. He said that the environment is the most important aspect to survive on this planet. Humans tend to forget that without a balanced environment, life cannot be sustained.