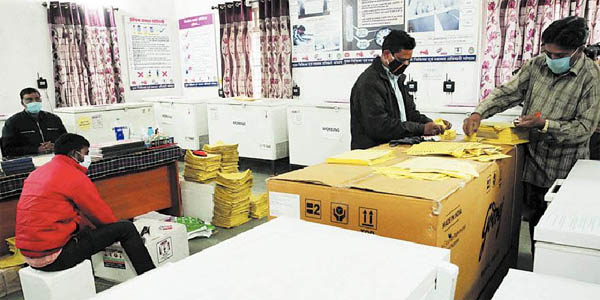 Chronicle Reporter, Bhopal-Prime Minister Narendra Modi has said that it is a matter of pride for India that Corona Vaccination, the world’s largest vaccination campaign, is starting in India from January 16. The two vaccines ‘Covishield’ and ‘Covaxin’ allowed for use in emergency, are both ‘Made in India’.

In the first phase of vaccination, about 03 crore people will be vaccinated against Corona. Among these, the first to be included are all the health workers, police personnel, defense personnel, sanitation workers followed by people above 50 years of age and those under 50 years who have ‘co-morbidity’ (i.e. diabetes, blood pressure, respiratory diseases etc.).

It’s a decisive phase, there should be no negligence

The Prime Minister, Narendra Modi said that we are in the decisive phase of the fight against Corona. Until and unless we win completely, we should not be negligent, and continue to take all precautions.

Prime Minister Modi said that a ‘Covin' digital platform’ has been created for monitoring vaccination work. The person who is vaccinated will be given a digital certificate as soon as the first dose is given, indicating the date of the next dose. After the second dose, the person will get the final certificate. The ‘real time’ entry of vaccination will be made on ‘Covin’. Modi said that other countries will ‘follow’ us in this task. There should not be any carelessness or negligence in this work.

Rumours and false propaganda have to be failed

Prime Minister Modi said that some people may spread rumours or falsely propagate the credibility of the vaccine, we have to completely thwart their efforts.

Action plan of Ministry of Animal Husbandry should be implemented

Prime Minister Modi also discussed about bird flu. He told all the states to implement the action plan of the Ministry of Animal Husbandry in this connection. Bird flu has been confirmed in 09 states including Madhya Pradesh. All water sources, bird sites, zoos, etc. should be constantly monitored and tested with samples immediately.

At the outset Home Minister, Amit Shah, said that the Drugs Controller General has allowed emergency use of Corona vaccine Covishield and Covaxin. Both these vaccines are completely safe and immunogenic.

Both vaccines are totally safe

Scientist at India Scientific Committee Dr. Vinod Pal said that both ‘Covishield’ and ‘Covaxin’ are totally safe. Both are ‘immunogenic’, that is to increase the body’s immunity, as well as prevent infection. The vaccine is also completely safe for those who have co-morbidity (other diseases). It produces anti bodies in the body to fight disease.

Corona is growing in developed countries, while it is continuously decreasing in India
Union Health Secretary Rajesh Bhushan told that while Corona is increasing in some developed countries of the world, it is continuously on the decline in India. In the middle of September, there were 10 lakh 17 thousand 154 active cases of Corona in India, whereas today there are only 2 lakh 22 thousand.

Helpline 1075 and 104
The ‘Covin’ helpline will be operated for assistance related to Corona issues. The number of the central helpline is 1075 and the helpline number 104 of the state governments.

Bhopal: Chief Medical and Health Officer Dr Prabhakar Tiwari said that cold storage of vaccine will be done at JP Hospital. A control room has been set up in Bhopal Smart City office to monitor the exercise. The vaccine will be transported in the ice box. After all the health workers, the vaccine will be administered to the front line workers and then other people. The first phase of the vaccination will be completed on January 16, 18, 20 and 23.

Bhopal Collector Lavania directed all the CMHOs, where dry run is left, to finish it as soon as possible. The collector said that eighty booths have been identified in the State capital for vaccination, all in hospitals. 126 sessions are proposed for vaccination at these points, where 30,000 healthcare workers will receive the doses of the COVID-19 vaccine. This process will take three-five days to finish.

Lavania said that the first phase work of the vaccination will begin simultaneously across the country and for that preparations have begun for January 16. All actions will be taken as per the guidelines issued by the Centre.