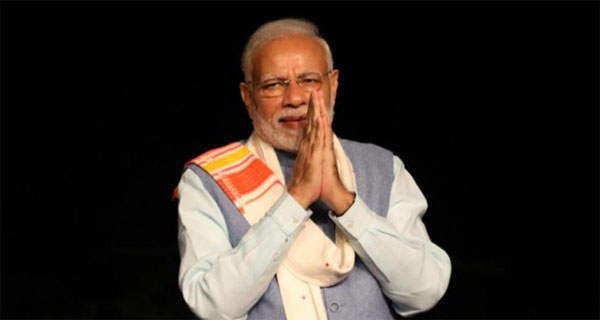 Prime Minister Narendra Modi on Saturday said that the country has surprised the world with its unity and resolve in the fight against Coronavirus.

In an open letter to the people of the country on the first anniversary of his second successive majority government by the BJP led NDA at the Centre, the PM further said that the present and future of 130 crore would never be dictated by an adversity

'As we were moving ahead at fast pace in the fulfilment of hopes and aspirations of our countrymen, the Coronavirus global pandemic engulfed our country as well. While on one hand are powers with great economic resources and state-of-the-art healthcare systems, on the other hand is our country besieged with problems amidst a vast population and limited resources. Many feared that India will become a problem for the world when Corona hits India. But today, through sheer confidence and resilience, you have transformed the way the world looks at us. You have proven that the collective strength and potential of Indians is unparalleled compared even to the powerful and prosperous countries of the world.

'We have displayed patience so far and we should continue to do so. This is one of the important at such a time, there is also a widespread debate on how the economies of various countries, including India's, will recover. However, given the way India has surprised the world with its unity and resolve in the fight against Coronavirus, there is a firm belief that we will also set an example in economic revival. In the economic domain, through their strength, 130 crore Indians can not only surprise the world but also inspire it,'the PM wrote in his letter to the nation.

'Due to the global pandemic this is certainly a time of crisis but for us Indians this is also a time for a firm resolve. We must always remember that the present and future of 130 crore will never be dictated by an adversity. We will decide our present and our future. We will move ahead on the path of progress and victory will be ours,' the PM stated.