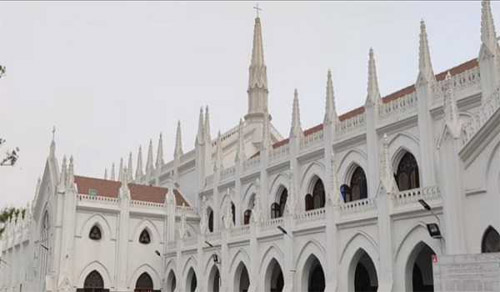 Chennai, Dec 25 (UNI) Christmas, the festival marking the birth of Jesus Christ, was celebrated with religious fervour, traditional gaiety and enthusiasm by the Christians in Tamil Nadu today.

As church bells tolled signalling the moment of Nativity, faithfuls converged for the midnight mass in cathedrals and churches as senior bishops and priests delivered the Christmas message.

Midnight and early morning masses were conducted in all the churches in which faithfuls participated by following the COVID protocols amid emergence of the Omicron variant of the virus.

Christians attired in new clothes thronged the churches for special masses and exchanged greetings with others.

All the churches were tastefully decorated and illuminated to mark the occasion.

The largest congregation was held at the Santhome Basilica in the city.

A midnight mass was conducted at the historic Punitha Arokia Matha (Velankanni Maadha) church (Shrine Basilica of Our Lady of Health) at Velankanni in Nagapattinam district, in which a large number of devotees and pilgrims took part.