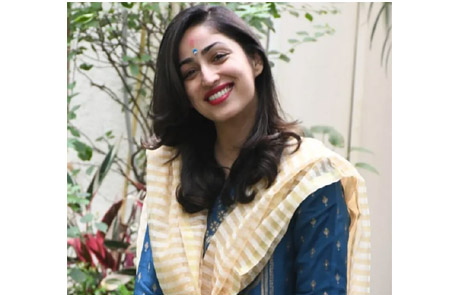 Ever since Bollywood actress Yami Gautam has got married to director Aditya Dhar she has been trending. The actress has been treating her fans with lovely pictures. Every time she steps out the actress ensures to make head turns. Her married look is still fresh in the minds of the people. Her Instagram feed is filled with such beautiful looks. The actress was today spotted in the city in another beautiful ethnic wear. But what grabbed our attention is her anklet, popularly called Payal worn by married females.
Coming back to Yami’s pictures, she is seen wearing a blue coloured Kurta set. There is golden embroidery on it and she paired it with grey colour pants. To complete the look she has worn a golden dupatta and carried a brown colour handbag. It looks like she is coming from a puja as there is tilak on her forehead. Her payal is taking over all her look. The silver anklet is making it look more beautiful as she poses for the shutterbugs.
The actress happily waved at shutterbugs while sitting in the car. Yami was last seen in Bhoot Police co starring Saif Ali Khan, Arjun Kapoor and Jacqueline Fernandez.
On the work front, Yami will be next seen in a lead role in ‘A Thursday’, ‘Dasvi’, ‘OMG- Oh My God 2’ and ‘Lost’.  Sharing her picture from the set of Dasvi, the Bala actress had written, “ My first day on the set of #Dasvi playing #JyotiDeswal. Proud & honoured to play an IPS officer. #JaiHind.”  The Vicky Donor actress was seen clad in IPS officer uniform.