Yoga courses should be made employable: Governor 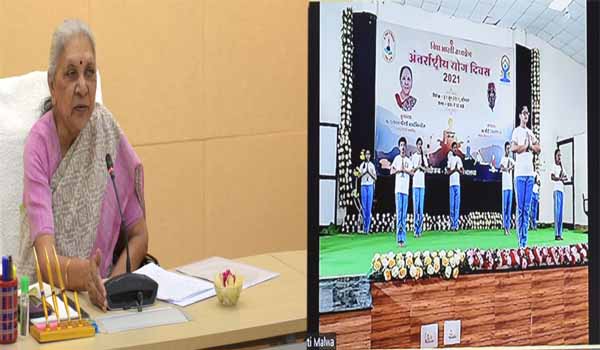 Governor Smt. Anandiben Patel has said that yoga helps in increasing work efficiency. The quality of work, mobility increases. Sensitivity develops in the behaviour of a person. Yoga connects the individual with other people. It also increases their ability to solve their problems. Governor Smt. Patel was addressing a programme organized by Vidya Bharti on the occasion of International Yoga Day from Raj Bhavan, Lucknow today.

Governor Smt. Patel said that mobile has changed the whole world today. People are spending most of their time on mobile. Yoga is the most suitable way to change and teach them something new. Effective efforts should be made by educational institutions in this direction. She said that as education minister in Gujarat, she had included yoga in the Class I to VIII curriculum. Lakhs of teachers were trained by preparing yoga courses. Detailed information on how intellectual, physical and spiritual strength can be gained through yoga practice and the utility of Yoga and it practise was included in the curriculum.Children are being trained on this basis in schools of Gujarat. Vidya Bharati’s also extended cooperation in this work. She said that yoga practice is very useful for children as well as officers employees. She told that when Prime Minister Shri Narendra Modi was the Chief Minister of Gujarat, he started the Karmayogi program, which was a 15-day event. The Chief Minister, Ministers, all the officers and employees of the All India Services took part in it. During this campaign everyone had to get up at 5:00 am, walk, run and practice yoga. This campaign brought a positive change in the behaviour of the officers, employees, which benefited both the public and the government.

Governor Smt. Patel said that Prime Minister Shri Narendra Modi has paid a lot of attention to Yoga, fitness and diet. Yoga has also been included in the new National Education Policy. Yogic activities are being incorporated in courses being prepared in universities and schools now. She said that yoga courses should be made employable as today there is a big demand for yoga instructors. So universities and colleges should start certificate, bachelor and masters courses of yoga. They should conduct researches in the field of yoga. She said that universities in the states of Madhya Pradesh and Uttar Pradesh are preparing yoga courses. By doing such courses, students will learn to practise yoga and will be able to teach others as well. She said that Maharishi Patanjali gave us the unique gift of yoga 5000 years ago.The present form of yoga is the outcome of continuous research and study of seers. Today the whole world is celebrating Yoga Day the credit of which goes to Prime Minister, Shri Narendra Modi, who proposed to celebrate Yoga Day in the United Nations in the year 2014. The proposal elaborating on the characteristics of yoga said that yoga is the science of making life disease -free, it is the practice of interlinking each other without any discrimination, to make life the best and full of values.

Governor Smt. Patel said that Yoga has helped a lot in dealing with various problems of the difficult period of Corona pandemic. During the lockdown, all the family members stayed at home and started practicing yoga together. She said that along with yoga practice, it is necessary to pay attention to nutritious diet. She said that in the difficult period of pandemic, doctors have served the patients by making a protective shield of yoga.

Even in hospitals, doctors and nurses have strengthened their spiritual power by making patients practice yoga. She said that yoga connects each other. It connects an individual with the society, children with parents. She said that this initiative of Vidya Bharti to inspire people all over the world for Yoga is commendable.

Shri Ramakrishna, President of Akhil Bharatiya Vidya Bharati Pratyaksh Shiksha Sansthan said that Yoga based lifestyle is necessary for developed, balanced, vital and spiritual development. Yoga develops immunity. All activities of the body are accelerated. She said that experts believe that regular practice of yoga is necessary while following the diet rules with concentration. This increases immunity in life. All the activities of the body become intense. One’s personality becomes sensitive and philanthropic. She said that Yoga has been known for centuries as an integral part of Indian culture but today the world has accepted it in a scientific and scriptural form. People all over the world want to adopt Yoga based way of life. She appreciated the efforts of Vidya Bharati for organizing a grand and divine programme on the occasion of International Yoga Day.