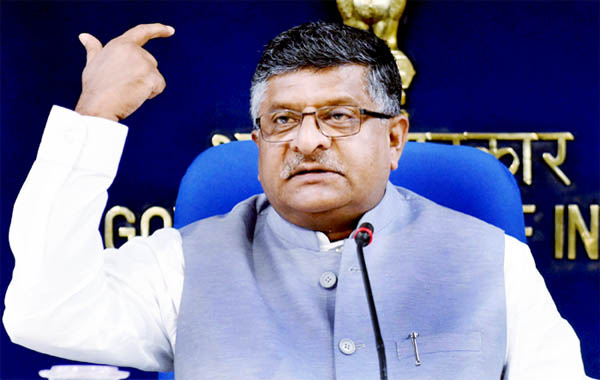 New Delhi, Union Law and IT Minister Ravi Shankar Prasad said on Friday that 123 crore people out of the 130 crore population of the country have accepted Aadhaar, and it has become a 'janadhaar'. Replying to a debate on The Aadhaar and Other Laws (Amendment) Bill, 2018, which will amend the Aadhaar Act, the Indian Telegraph Act, and the Prevention of Money-laundering Act (PMLA) , Mr Prasad said Aadhaar is for the country, and all shortfalls of the earlier Aadhhar Bill have been removed. The Aadhaar Act provides targeted delivery of subsidies and benefits to individuals residing in India by assigning them unique identity numbers, called Aadhaar numbers, Mr Prasad said. The Bill, introduced on January 2, was passed with voice vote.Under the Aadhaar Act, an individual’s identity may be verified by Aadhaar ‘authentication’. Authentication involves submitting the Aadhaar number, and their biometric and demographic information to the Central Identities Data Repository for verification. The Bill additionally allows ‘offline verification’ of an individual’s identity, without authentication, through modes specified by the Unique Identification Authority of India (UIDAI) by regulations. Under MGREGA, the Minister said, fake workers were paid, but now the money will be going to the accounts of labourers. 'There will be no middlemen, no cutting, no fitting and no selling,' he said, adding that digital identity has been strengthened with the new law.The Aadhaar has been appreciated abroad including the African countries, he said. About permitting voluntary use of Aadhaar for mobile SIM card and bank account authentication, and allowing children who turn 18 to opt out of the system, he said if a 18-year old can vote then why can't he or she find about Aadhaar. During offline verification, the agency must obtain the consent of the individual, inform them of alternatives to sharing information, and not collect, use or store Aadhaar number or biometric information. The Act provides for the use of Aadhaar number as proof of identity of a person, subject to authentication. The Bill replaces this provision to state that an individual may voluntarily use his Aadhaar number to establish his identity, by authentication or offline verification. The Bill states that authentication of an individual’s identity via Aadhaar, for the provision of any service, may be made mandatory only by a law of Parliament. Under the Act, usage of Aadhaar number for establishing the identity of an individual, by the State or a body corporate under any law, is permitted. The Bill removes this provision. An entity may be allowed to perform authentication through Aadhaar, if the UIDAI is satisfied that it is compliant with certain standards of privacy and security, or permitted by law, or seeking authentication for a purpose specified by the central government in the interest of the State.