Action will be taken, if permit given to 15 years old school vehicles 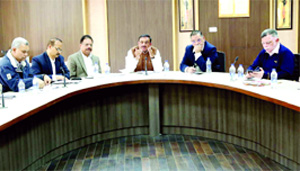 Chronicle Reporter, Bhopal A strict action will be taken against the concerned R.T.O. for giving permit to 15 years old school vehicles. R.T.Os must check vehicles by conducting field visits four days in a week. Moreover, a special checking campaign should be conducted till January 30. Minister for Home and Transport Bhupendra Singh said this in a meeting of Transport and Police Officers. Minister Singh mentioned that sufficient police force will be provided for the checking campaign. He further stated that speed governor and GPS must be of good quality. Numbers of children commuting in the vehicles should be fixed and the speed of school vehicles should not be more than 40 k.m. per hour. Training to the drivers should be imparted from time to time, he added. Singh informed that a committee of Collector, Superintendent of Police and R.T.O. besides a committee of S.D.M. and S.D.O.P. has been made at district and sub-divisional level respectively. These committees will take proper steps in connection with the children’s safety after deliberating with the parents. He further said that the compliance of norms prescribed for the school buses must be ensured completely. Passenger Buses Must have Proper Timings Moreover, Singh said that passenger buses must have proper timings to avoid race among them. There should not be a gap of less than 5 minutes during the departure of 2 buses. Regular checking of these vehicles must be conducted. Routes Formation Singh said that formation of all the routes should be carried out by January 30. New permits will be issued as required after the formation.Principal Secretary Transport Malay Shrivastava said that the participation of School Education Department will also be ensured in this campaign. Director General of Police Rishi Kumar Shukla stated that the Police Department will fully cooperate in the campaign. Transport Commissioner Shailendra Shrivastava mentioned that decision in connection to the schools’ autos and vans will be taken after the discussion with the parents. Senior Officers of Transport and Police Departments were present in the meeting.