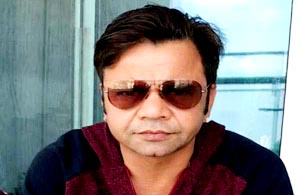 New Delhi, A Delhi Court on Monday sentenced actor Rajpal Yadav to six months in jail in seven cheque bounce cases and not returning loan amount of Rs 8 crore to a businessman. Complainant Murli Projects has granted a loan of Rs 5 crore to the Rajpal Yadav and his wife in the year 2010 and both had agreed to repay a sum of Rs 8 crore, including the principle and the interest by June 30, 2011. Additional Chief Metropolitan Magistrate (ACMM) Amit Arora after hearing the matter said “Complainant has been litigating this matter for last five years. As per a High Court order of 2016, settlement was agreed upon by both the parties by which Yadav had to pay Rs 10.40 crore to the complainant but the amount has still not been paid. Record reflects that convicts have made several undertakings before the high court claiming that the amount will be repaid, however, of no avail.” The court further consider that another undertaking was given by the convicts before the High Court regarding cheques worth Rs 7 crore given by them to the complainant that they shall be honoured, but it never happened. It was submitted on behalf of the Rajpal Yadav that he was liable to pay Rs 8 crore and a fresh schedule of payment was worked out by them where they agreed to pay the subsequent interest which accrued over and above the principle amount and the initially agreed interest amount of Rs 8 crore. Additional Chief Metropolitan Magistrate (ACMM) Amit Arora after hearing both the submission said “the convicts handed the impugned cheques to the complainant which all got dishonoured in 2013. Thus I do not find any merit in the contention of the defence counsel that the liability of the convict is only to the extent of Rs 3 crore.” Additional Chief Metropolitan Magistrate said “the convict number 2 (Rajpal Yadav) is highly contemptuous and he had acted in complete disregard to undertakings given by him. Thus in these circumstances, no leniency is called for and accordingly convict 2, Rajpal Yadav is hereby sentenced to simple imprisonment for a period of six months in each case.” The Court said for Rajpal’s wife Radha Yadav that she was only a signatory on the cheques and signed those cheques on being asked by her husband Rajpal Yadav. It also took into consideration that she was a woman so did not award imprisonment to his wife, who was also held guilty along with Rajpal for the offence under section 138 of the Negotiable Instruments Act by considering that she had signed those cheques on being asked by her husband. The court also imposed separate fines on the couple and said Rajpal to pay Rs 11.2 crore and his wife Radha to pay Rs 70 lakh collectively in all the seven cases in which they have been held guilty. The Court further granted bail to Rajpal on a personal bond of Rs 50,000.