Actresses have to prove themselves every day: Rani 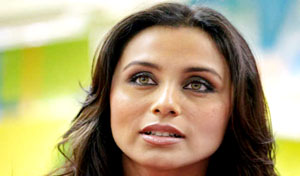 New Delhi, Lamenting the various stereotypes that prevail in the film industry towards women, especially for a married actress, Bollywood actor Rani Mukherjee says her comeback to acting with 'Hicki' was an effort to take on this sexist stereotype. In an open letter on her 40th birthday on Wednesday, Rani, talking about her journey, said, 'As a woman, I must admit, it has not been an easy journey. I had to prove myself every day. Actresses have to prove themselves every day.' ' A woman has a short career span, a married woman's equity dies, women are not bankable commodities at the box office, 'female-centric' (I hate this word!!) films are huge risks, a married actress who is also a mother is the final nail in the coffin of her dreams, ambitions and aspirations - these are some of the discriminatory stereotypes that we have to live with and try to overcome every single day. I have tried to take on this sexist stereotype by coming back to acting after my marriage and motherhood,' she said. In her letter, Rani, whose comeback film hits screens tomorrow, said,' It feels great to have also worked for 22 years and having been incredibly lucky to get so much love and appreciation.. Very rarely do we artists get material that can genuinely cause social change, cause change in attitude and thinking and I have been fortunate enough to get such content multiple times. I truly feel blessed. I thank all the film-makers who have trusted me with their characters. Your characters, your films, became my identity.' 'Hichki' is Rani's first film after giving birth to Adira. Directed by Sidharth P Malhotra and produced by Maneesh Sharma and Aditya Chopra under the banner of Yash Raj Films, 'Hichki ' is an adaptation of Hollywood film Front of the Class (2008), which itself was based on the book, Front of the Class: How Tourette Syndrome Made Me the Teacher I Never Had, by Brad Cohen, of which Yash Raj Films acquired the rights. The film stars Rani in the lead role of a teacher having Tourette syndrome.Besides Rani, the film features Harsh Mayar, Sachin Pilgaonka, Supriya Pilgaonka, Kunal Shinde, Shivkumar Subramaniam and Neeraj Kabi in key roles.