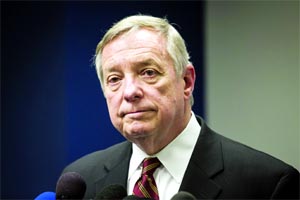 Agencies, Johannesburg The African group of ambassadors to the United Nations has issued an extraordinary statement condemning the “outrageous, racist and xenophobic remarks” by President Donald Trump and demanding a retraction and apology, the agency has reported. Former US ambassador to the UN Samantha Power has shared the statement on Twitter, saying: “Whoa. I’ve never seen a statement like this by African countries directed at the United States.” The African ambassadors issued the statement late Friday following an emergency meeting after Mr Trump used vulgar language to reject an immigration bill, asking why the US would take in more people from Haiti and “sh*thole countries” in Africa. Mr Trump has denied using that language but others present say he did. He tweeted Friday that he used “tough” language but “not that language,” which was being taken as a denial of the “shithole” comment, although Mr Trump did not specifically reference that phrase in his denial. In Chicago, Senator Dick Durbin, D-Illinois, told reporters the president’s denial wasn’t true. “It is not true,” said Durbin, who was one of the lawmakers at the Oval Office meeting. “He said these hate-filled things. And he said them repeatedly.” The statement the African ambassadors issued expresses concern over the Trump administration’s apparent increasing denigration of Africa “and people of colour.” Mr Trump’s comment has triggered widespread condemnation. At least one more African leader spoke up on Saturday. Ghana’s President Nana Akufo-Addo called Mr Trump’s remark “extremely unfortunate” and said that “we will not accept such insults, even from a leader of a friendly country, no matter how powerful.” Haitians reacted with outrage Friday to reports of Mr Trump’s remarks. President Jovenel Moise’s government issued a strongly worded statement denouncing what it called a “racist” view of Haitian immigrants and people from African countries. Mr Trump’s remarks have also left the small cluster of immigration hard-line groups whose agenda Mr Trump has embraced scrambling to distance themselves from the president.