After Amaze, Honda to bring CR-V and Civic in new avatar 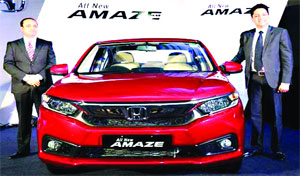 Agencies, Chandigarh, With the launch of new edition of ‘Honda Amaze’, country’s leading car maker Honda Cars India Limited (HSIL) will launch two more of its existing vehicles, Honda CR-V and Honda Civic in new avatar during this fiscal year, Company’s Senior Vice President and Director, Sales & Marketing Rajesh Goel said here today. Speaking to agencies on the sidelines of launch ceremony of all new 2nd Generation ‘Honda Amaze’, he said the year will witness another two major events, the launch of ‘Honda CR-V’ 5th edition and re-launch of ‘Honda Civic’ in the Indian market by the company. All these three new vehicles will not only strengthen the company’s position in the market but also give a fillip to its growth to cross double digits and sales as well, he added. About the new car, Mr Goel said India is the first country in the world where all new Honda Amaze and also the new Diesel CVT technology have been launched. To a question, he said the sub four meter car, available in different petrol and diesel variants, has been designed and developed at Honda R&D Asia Pacific Company Limited in Thailand. It has been built on all new platform, embedded with all safety features. It also offers premium experience of bold design, sophisticated and spacious interior, more efficient Power-train, outstanding driving dynamics and advanced features than the previous edition, he added. The company has offered the introductory prices ranging from Rs 5,99,900 to Rs 7,99,900 and Rs 6,69,900 to Rs 8,99,900 for petrol and diesel for first 20,000 customers and thereafter, it will review the price list. It has also offered to customers three years or unlimited kilometers warranty as standard, extendable to another two years/unlimited kilometers.