After ‘Dulhania’ series they are back with ‘Rannbhoomi’! 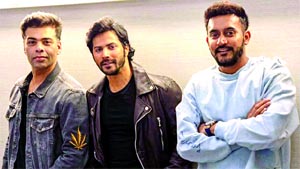 Actor Varun Dhawan who was starred in director Shashank Khaitan’s Humpty Sharma Ki Dulhania and Badrinath Ki Dulhania, produced by Karan Johar, is all set to mark his third outing with these in ‘Rannbhoomi’. Filmmaker Karan Johar shared the news on social media about his next production venture. Though the rest of the leading cast has not been revealed yet but Karan Johar confirmed that Varun Dhawan will play the lead role in this Shashank Khaitan directorial. While sharing the news Karan Johar wrote, “So proud to announce #RANNBHOOMI ...@ShashankKhaitan and @Varun_dvn take a giant leap in their third offering together! A solid spectacle with a beating heart!!! DIWALI 2020 release! Remaining lead cast to be announced soon! @DharmaMovies @apoorvamehta18”. ‘Rannbhoomi’ is slated to release on Diwali 2020. Shashank Khaitan is currently busy with Dharma Productions’ ‘Dhadak’ starring Ishaan Khatter and Janhvi Kapoor. Varun Dhawan is gearing up for his next release ‘October’ directed by Shoojit Sircar and also he is prepping for YRF’s ‘Sui Dhaaga’ with Anushka Sharma which is being directed by Sharat Katariya.