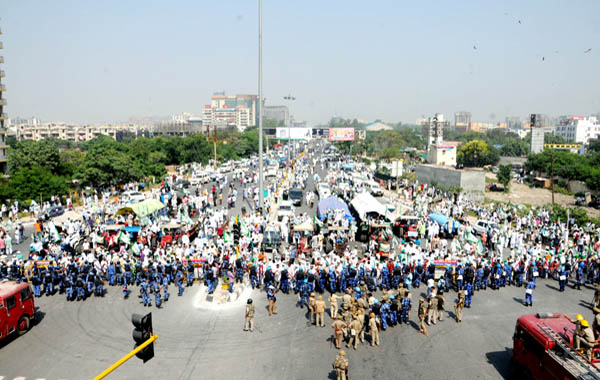 New Delhi, Delhi police on Tuesday had to lob teargas shells and water cannons to prevent large number of agitating ryots of the Bharatiya Kisan Union, who were trying to enter the national capital near Gazipur border. The farmers, under the leadership of Rakesh Tikait, wanted to enter Delhi to carry out their 'Kisan Kranti Padyatra', demanding loan waiver. When the farmers tried to break through the barricades put in place by the police, police was forced to use water canons and teargas shells. Later, senior officers of the police started talks with their leaders, while large number of farmers are present at the Delhi UP border at Ghazipur with their vehicles. A high-level meeting is being held on the demand of farmers at the residence of Union Home Minister Rajnath Singh, in which Agriculture Minister Radha Mohan Singh is also present. The farmers had began their journey in Haridwar, which was to conclude here today.Keeping in view the situation, a large number of policemen were deployed around the national capital's border, especially at the Delhi UP border. The Delhi traffic police has also issued an advisory regarding the same with suitable diversions for motorists informing them about suitable routes to be taken.