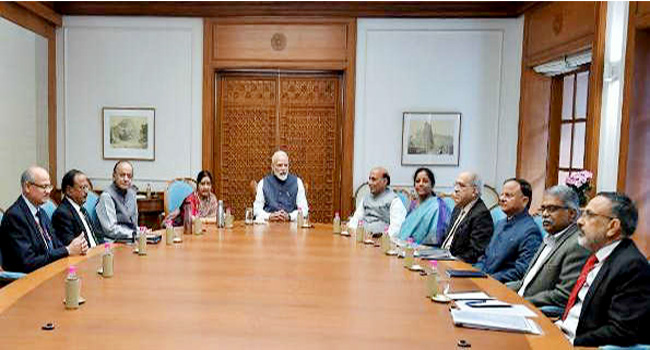 New Delhi, Seeking to take its war against Pakistan-sponsored terrorism to its logical end, India struck the biggest training camp of Jaish-e-Mohammed in Balakot in early hours of Tuesday. "In this operation, a very large number of JeM terrorists, trainers, senior commander and Jihadis were eliminated," Foreign Secretary Vijay Gokhale told reporters here. "JeM has been active in Pakistan for last two decades and is led by Masood Azhar with its headquarters in Bahawalpur," Mr Gokhale said even as political leaders, including from the government and opposition parties, hailed the surgical strike carried out by the armed forces. "This facility in Balakot was headed by Maulana Yusuf Azhar alias Ustad Ghouri, brother-in-law of JeM Chief Masood Azhar," he said, adding that the location of the attack was in deep forest on a hilltop. "The selection of the target was also conditioned by our desire to avoid civilian casualty," he said. The Government of India is firmly and resolutely committed to taking all necessary measures to fight the menace of terrorism. Hence this non-military preemptive action was specifically targeted at the JeM camp, he said. Avenging the Pulwama attack that claimed lives of 40 CRPF personnel on February14 and armed with 'free hand' green signal from Prime Minister Narendra Modi, Indian Air Forces early Tuesday morning struck the terror bases in Pakistan and destroyed at least three terror camps run by Jaish-e-Mohammed. Sources said camps at Chakoti and Muzaffarabad - were also destroyed. The Prime Minister chaired a crucial meeting of the Cabinet Committee on Security which was being attended by National Security Advisor Ajit Doval also. Defence Minister Nirmala Sitharaman, Finance Minister Arun Jaitley, External Affairs Minister Sushma Swaraj and Home Minister Rajnath Singh -- all members of CCS were present at the meeting. Former Army chief Gen (Retd) V K Singh, now MoS External Affairs Minister in a tweet said, "They say they want India to bleed with a 1,000 cuts. We say that each time you attack us, be certain we will get back at you, harder and stronger. Salute the brave pilots of the Indian Air Forces that carried out the strike". Unlike the 2016 September surgical strike, Pakistan on Monday admitted about the strike saying the Indian aircraft "intruded" from Muzaffarabad sector and also "released payload". The use of phrase "released payload" suggests - there could be huge bombing-- something which Pakistan will not admit if the impact is not big, say experts. "Facing timely and effective response from Pakistan Air Force released payload in haste while escaping which fell near Balakot. No casualties or damage," Major General Asif Ghafoor, spokesperson of Pakistan Armed Forces claimed in his early morning tweet. Meanwhile, Pakistan Foreign Minister Shah Mahmood Qureshi has reportedly postponed his visit to Japan and said "India has conducted a violation of the Line of Control and Pakistan reserves the right to an appropriate response". Among others Congress president Rahul Gandhi and Delhi Chief Minister Arvind Kejriwal lauded the Air Force for the strike.