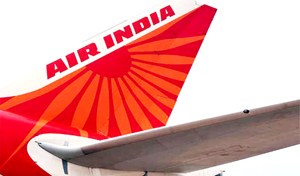 New Delhi, Air India on Thursday launched its inaugural flight linking New Delhi to Tel Aviv with a direct flight. Flight AI139, operated with a 256-seater Boeing 787 Dreamliner, took off from the Indira Gandhi International Airport at 1800 hrs. The flight will arrive at the Ben Gurion International Airport at Tel Aviv at 2145 hrs. The return flight AI140 will depart from Tel Aviv at 2315 hrs and reach Delhi at 1000 hrs tomorrow (All Local Time). From 1st April , 2018, AI139 will depart Delhi at 1650 hrs and reach Tel Aviv at 2145 hrs. The return flight AI140 will leave Tel Aviv at 2315 hrs to reach Delhi at 0900 hrs, the next day (All Local Time). The flight will operate thrice-a-week on Tuesdays, Thursdays and Sundays and will cover the distance in around seven hours - making it the fastest air- connectivity from India to Israel. At a simple function to mark the launch, CMD Air India Pradeep Singh Kharola, along with Director, Israel Ministry of Tourism Hassan Madah, and other senior Air India executives lit ceremonial lamp heralding a new era in India’s air-connectivity. A cake was also cut on the occasion. “The inaugural flight from Delhi to Tel Aviv today is a historic occasion for both the countries,” said CMD Air India Mr Pradeep Singh Kharola. The start of this flight will boost the tourism and trade sectors and fulfill a long-standing desire of a fast air-connectivity between the two countries. The flight will also attract travellers from countries, in the Far East, Southeast Asia and Australia. The duration of the flight between Delhi and Tel Aviv will be around 2 hours shorter than that taken by Israel's national carrier El Al, which has direct flights between Tel Aviv and Mumbai.