Airport infrastructure to attract 1 lakh crore in next 5 yrs: Sinha 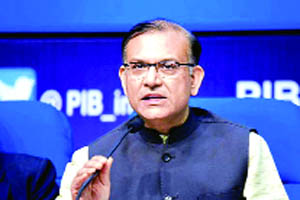 New Delhi: Airport infrastructure will attract almost Rs 1 lakh crore in the next 4 years as government has massive plan to boost the aviation sector. Briefing reporters, Minister of State for Civil Aviation, Jayant Sinha said on Wednesday that government is working on plans and projects keeping the requirement of next 15 to 20 years, not 5 years. He said that the 100 airport at Pakyong in Sikkim will become operational by June 2018. It has gained importance as Sikkim has no operational airport till date. Mr Sinha said that as per the estimates Airport infrastructure development needs more than Rs 3 to 4 lakh crores to have adequate facilities in the long run. But for the next 4-5 years, an investment of Rs 1 lakh crores is on the cards. A major portion of the investment will come from private sector. He said that the Indian Aviation sector is growing at the rate of 18-20 per cent which is highest in the world and it needs more and better infrastructures. Answering a question when passengers will be able to get wi-fi facility during the flights, Mr Sinha said that it will depend on the airlines as they have to do the tech installation. As and when they will do that, they will announce separately.