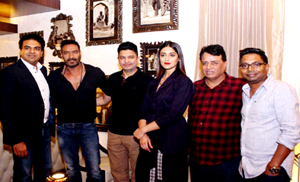 New Delhi, Bollywood actor, known for his intense acting Ajay Devgn along with beautiful Ileana D'Cruz promoted their upcoming crime drama flick, "Raid" out here in Delhi. Along with the cast, producer Bhushan Kumar, Kumar Mangat Pathak, and director of the film Raj Kumar Gupta were also present. Apart from this, the entire team of 'Raid' also launched 'INOX INSIGNIA', known as the first Laserplex in Delhi and the whole of North India. Ajay and Ileana shared their experiences and uniqueness about the movie. On being the part of socially serious films and on the take of anti-politician issues Ajay stated, "No matter its politician, you and me, we from industry, media, where do we come from, we come from the same society. And we are the part of the same society which belongs to good people and bad people as well. There are corrupted people also. And anti-politician doesn't mean every politician in the country is corrupt.' 'There are two different things when we are talking about the films and we are talking about some corruption, we are showing some corruption. And I have also done 'Rajneeti' when I was a politician, what would you say about that. So there are different and all types of people. I did many different kinds of films, this is not the only forte I work with,' he said. Whereas, the producer Bhushan Kumar and actress Ileana D'Cruz and director of the film Raj Kumar Gupta seemed excited and positive about their upcoming film.On talking about the launch of 'INOX INSIGNIA', the director of INOX Siddharth stated, "We began our journey from Mumbai to Banglore and now finally in Delhi also. We believe it's our duty to improve the cinema-going experience. I hope everyone will enjoy this latest technology and have better experience." This film is featured under the banner of T-Series and Panorama Studios. "Raid" is written by Ritesh Shah and directed by Raj Kumar Gupta. Apart from Ajay Devgn, Ileana D'Cruz it also stars Saanand Verma and Saurabh Shukla in prominent roles.The principal photography of the film commenced at Lucknow and Raebareli. The movie is scheduled to release on March 16.