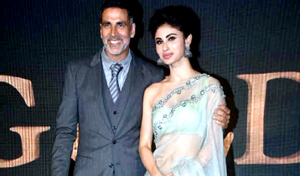 New Delhi, Actress Mouni Roy who is all set to make her big screen debut with Akshay Kumar starrer ‘Gold’ received appreciation from Akshay for her hard work. At a recent event when Mouni was asked about her experience of working on a film and on a Daily soap, Akshay took the initiative and answered the question for her. When the question was being asked Akshay Kumar said, "I Think I will answer it. I think they work much harder than us." The makers of the film have released two songs from the movie featuring Akshay Kumar and Mouni Roy, in the first song 'Naino Se Baandhi' we see a glimpse of the sweet husband-wife bond shared by both the actors and the second song has a drunk Akshay Kumar and an embarrassed Mouni Roy in the video. ‘Gold' marks the Bollywood debut of actress Mouni Roy opposite Akshay Kumar. 'Gold' not only marks the first ever association between Akshay Kumar and Excel Entertainment led by Ritesh Sidhwani and Farhan Akhtar but also is the debut of TV sensation Mouni Roy. Starring Akshay Kumar, Mouni Roy, Kunal Kapoor, Amit Sadh, Vineet Singh and Sunny Kaushal, Gold promises power packed performances by an ensemble cast. Gold is produced by Ritesh Sidhwani and Farhan Akhtar, helmed by Reema Kagti and is all set to release on August 15.