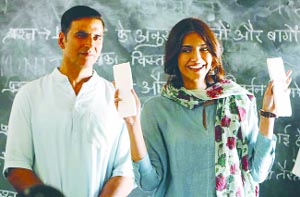 Akshay Kumar, has received positive reviews and wide appreciation with Pad Man this year. But, Akshay’s real success comes out in the form of different initiatives that Pad Man, which deals with menstruation and the lack of sanitary napkins, seems to have taken off. Recently, Akshay inaugurated the Asmita Yojana, an initiative by the Government of Maharashtra to distribute subsidised sanitary napkins to women in rural parts of the state. The Ministry of Railways has also announced that 200 railway stations across the country would get sanitary napkin dispensers and incinerators. In another instance, two girls from Jaipur, who were impressed with the film, started a pad bank to help women who couldn’t afford sanitary napkins. A source says, “Akshay ensured that Arunachalam Muruganantham, the original Padman, was present at some promotional events because he wanted people to know Arunachalam and the work he did. Although Akshay is thrilled with the box-office success of Pad Man, the film was more than just a project for him. Ever since its release in Feb, Akshay hasn’t stopped hearing about how people from different parts of India are coming up with initiatives for women. He was ecstatic to install a pad vending machine at the Mumbai Central ST Bus Depot. He is open to more initiatives of this kind.”Besides this, the actor has been vocal about his support for women, and has posted videos advocating self-defence for women.