Alia Bhatt is all set to be Sehmat, She is ‘Raazi’ 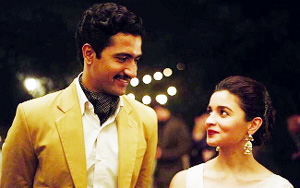 The teaser of the forthcoming Alia Bhat and Vicky Kaushal starrer ‘Raazi’ is here. While Alia Bhatt takes a serious phone call in the teaser we cannot wait to know the secret mission that is going to be told to us day after when the trailer is dropped out on 10th April 2018. The powerhouse of talent has been keeping her fans engaged by dropping a few stills from the film every now and then but now the wait comes to an end. The official Twitter handle of the film shared the teaser of the film, which gives us a glimpse into the secret world of Sehmat. Produced by Dharma Productions and Junglee Pictures and Directed by Meghna Gulzar, Raazi is a story based on the best selling novel by Harinder S Sikka titled ‘Calling Sehmat’. Alia is playing the role of a Kashmiri, who is an Indian spy and is married to a Pakistani Army official, Vicky Kaushal. The film is slated to release on 11th May 2018.