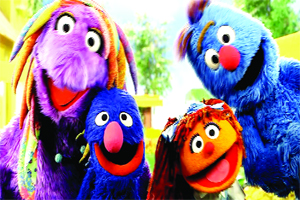 Chronicle Reporter, Bhopal The popular kids’ programme Galli Galli Sim Sim, the Indian adaptation of the internationally acclaimed TV series- Sesame Street, recently launched its 6th season on DD Madhya Pradesh which will be followed by the 7th season. Galli Galli Sim Sim has been broadcasting on the channel since 2014. The show reached 4 million children[1] since the last year. The show broadcasts on DD Madhya Pradesh on every Saturday at 8:30 AM and Friday at 3 PM. The Season 6 and 7 of Galli Galli Sim Sim, which was funded by Children’s Investment Fund Foundation, engages and educates children on important life skills that enable them to be school ready. Each episode of Galli Galli Sim Sim has multiple segments that are thematically linked together to address a whole-child curriculum. In Season 6 you’ll see – Grover’s antics with Hero in his dhaba; Elmo chasing the dancing akshar, Bert and Ernie going on fantastic adventures and Aanchoo riding on her bookmobile. The new segments and Galli Ki Duniya highlights Season 6’s curriculum focus on literacy and numeracy and delights fans of all ages. The loveable muppets teach skills that are important for children to understand and provide language to engage in meaningful conversations and form the basis for learning to read and write. They will also emphasise on important mathematical concepts like understanding numbers, patterns, measurements, observational skills and number operations. Season 7 of Galli Galli Sim Sim, along with the furry and funny muppets and an all new human star cast – Aamir, Pia Aunty and Doctor Didi, will further reinforce to children, soft skills and values of sharing, making friends, healthy habits and task persistence. In Season 7, Grover will take to the streets in search of the meaning of new words and to the sky in Super Grover 2.0 to teach children concepts around STEM (Science, Technology, Engineering and Math). The Elmo and Parents segment of the show will model strategies and behaviours to address topics like bullying, self-esteem and confidence, using vocabulary to express oneself, keeping your body safe, reflecting on the feelings of others and learning strategies for responding to academic, social and emotional challenges. Viewers will also witness foot- tapping Bollywood numbers and will enjoy and understand our rich diversity through stories from different parts of the country in the live-action segments which will feature in the Season 7 of the show.