All opposition parties will unitedly fight for rights of farmers & youth: Rahul 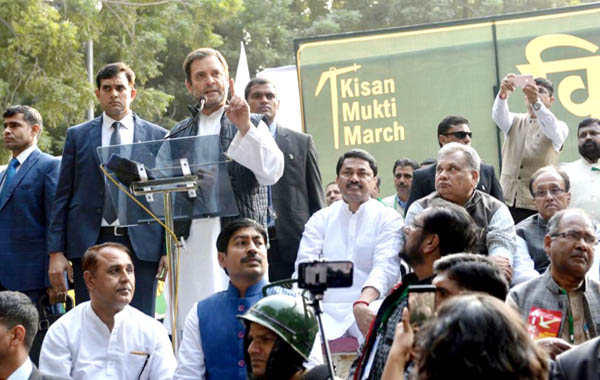 New Delhi, Terming the battle being fought by the Congress and other opposition parties with the BJP as one for the rights of the farmers and the youth, Congress president Rahul Gandhi on Friday said they would unitedly fight to secure the rights of these sections of society even if it meant removing a chief minister or even Prime Minister Narendra Modi. Addressing a fermers’ protest at Jantar mantar in the capital, which saw the leaders of various opposition parties like the CPI, CPM, National Conference and the Aam Aadmi Party gather on one platform, the Congress president said ,’’the battle today is for securing the rights of farmers and the youth. Today we have two big issues in the country which should be addressed-- farmers' issue and employment of youth. We may have different views but we are gathered at one stage here for the rights of farmers . We will unitedly work to ensure the rights of the farmers and the youth.. For that if we need to change Chief Minister, we'll do that and for that if we need to change the Prime Minister, we'll do that.’’ Assuring the gathering that the opposition was united in its battle against the BJP to secure rights of farmers, Rahul said,’’this is the voice of India's youth that can be heard in Madhya Pradesh, Chhattisgarh, everywhere. This voice cannot be muffled. I have talked to all the leaders of different parties, they are with us for this cause. I assure you that we are all standing with you.’’ Charging the Prime Minister of favoring 'his 15 corporate friends' by waiving off their loans , Rahul asked him to waive off the debts of poor farmers who have gathered here to raise their several unfulfilled demands. ‘’A loan of Rs 3.5 lakh crore taken by the PM’s 15 corporate friends was waived off by this Government. If their loans can be waived off by the Government why can’t they waive off the loans of farmers?,’’Rahul asked. Addressing the farmers from various states, including West Bengal, Uttar Pradesh, Haryana, Punjab, Maharashtra, Tamil Nadu, Andhra Pradesh, Gujarat, Madhya Pradesh, Mr Gandhi asked,'why farmers' loans were not waived off yet. They are not asking for any free gift. Whatever they are asking for is their right.’’ Charging the PM and the BJP Government at the Centre of failing to fulfill the promises made to the farmers by his governmet, Rahul said,’’ PM had said farmers will get bonus, MSP will be raised, but nothing happened. Instead, the money given by farmers for the insurance scheme was put in the pocket of Anil Ambani. If Mr Modi can give Rs 30,000 crore to Anil Ambani, then he should help the farmers as well.’’ Rahul shared the stage with CPI’s D Raja, CPM’s Sitaram Yechury, National Conference’s Farooq Abdullah, Aam Aadmi Party’s Sanjay Singh and Loktantrik Janata Dal leader Sharad yadav. All India Kisan Sangharsh Co-ordination Committee (AIKSCC), an umbrella body of 208 farmers and agriculture workers organisations, is organising the protest. Over one lakh farmers, who were camping at the Ramlila ground since Thursday, started their march to Parliament street in the morning.Farmers are raising their long time demands including loan waiver, increasing Minimum Support Price (MSP) for produces, special Parliament session of agrarian distress and to pass the two private members bills, which were introduced in Lok Sabha and Rajya Sabha by Raju Shetty and KK Ragesh respectively, last year.