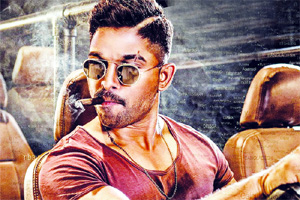 Among the new generation stars, Allu Arjun is showing clear dominance on social media. While even his Hindi-dubbed films getting record number of YouTube, digital views in hours, the latest is that on the poster of his film Naa Peru Surya Naa Illu India got a stunning number of 710 K tweets in just 24 hours of time, taking even social media experts by storm. On several occasions too earlier, Allu Arjun showcased his stamina on social media. But this time, he raised the bar higher. Sporting a short hairdo, a small scar right across his left eyebrow, trimmed mustache, trendy sunglasses, cigar in the mouth and chiseled physique, Allu Arjun looked stunning in the befitting poster. Needless to say that the stylists of Stylish Star have done a meticulous job in styling him in soldier avatar. This look has now gone viral on Twitter and Facebook. With this fans of Bunny are hailing him with the tag ‘King of Social Media’.