Alok Verma sent on leave as he was collecting documents on Rafale, country & Constitution in danger: Rahul 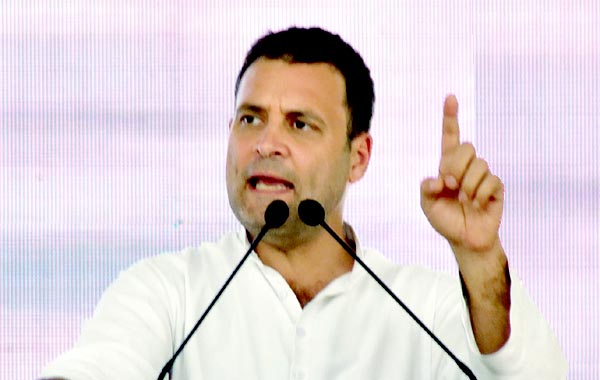 New Delhi, Launching a sharp attack on Prime Minister Narendra Modi on the CBI director Alok Verma being sent on leave and appointment of M Nageshwar Rao as interim director, Congress president Rahul Gandhi on Wednesday alleged Verma was sent on leave as he was collecting documents on the Rafale deal. Alleging that through the decision to send Verma on leave, the PM has sent across a message that anyone coming in the way of the probe on Rafale scam would be removed, the Congress president said adding that the country and the Constitution are in danger . ‘’The CBI chief Alok Verma was collecting documents on the Rafale deal. He was forcibly sent on leave. The message from the PM is absolutely clear that whoever comes in the way of the Rafale scam would be removed. The country and the Constitution are in danger,’’Rahul said in a tweet. In an unprecedented fallout of the recent happenings within the Central Bureau of Investigation, agency chief Alok Verma and his deputy Rakesh Asthana have been sent on leave and M Nageshwar Rao, a senior Joint Director with the probe agency, has been given the interim charge as CBI director. According to an order by the Appointments committee of the Cabinet, Mr Verma and his deputy Mr Asthana have been sent on leave. Mr Rao was appointed interim CBI chief early on Wednesday morning. 'The appointments committee of the cabinet has approved that during the subsistence of the aforesaid interim measure, Mr M Nageshwar Rao, IPS, will look after duties and functions of director CBI and shall take over the duties and functions with immediate effect," the order by the committee said. The order came with recommendation by the country's top vigilance officer, Chief Vigilance Commissioner KV Chaudhary, that the CBI's warring top two be sent on compulsory wait, stripped of all responsibilities, a top government functionary said. This comes after the probe agency had filed case against Mr Asthana, wherein he was accused by the agency of bribery. Mr Astana has been accused of taking Rs 3 crore as bribe from a businessman.