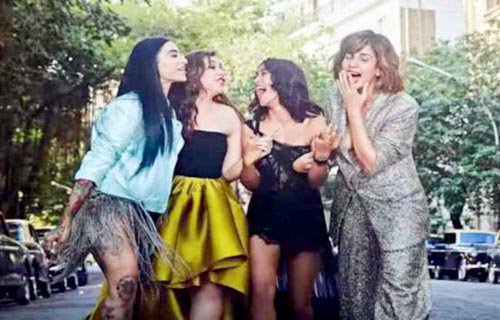 New Delhi, Amazon Prime Video has announced their upcoming Prime Original series titled ‘Four More Shots Please!’, adding another Indian original production to its existing slate.The show takes a close look at the lives of four young, urban Indian women and gives a voice to a new generation who live and love on their own terms. In its first season, this 10-part comedy, drama and romance series is anchored in the unceasing friendship between our four women and revolves around their relationships, work-life conflicts, ambitions and anxieties as they live, love and deal with being women in the India of 2018. Created in collaboration with Rangita Pritish Nandy, produced by Pritish Nandy Communications and directed by Anu Menon, the show is helmed by a predominantly women cast and crew. The series of course, casts zero judgment or moral lessons and has no man swooping in to save our women at end of the day—this is genuinely an equal worlds show. The Prime Original series will be available exclusively for Prime members on January 25, 2019 across more than 200 countries and territories. Vijay Subramaniam, Director and Head, Content, Amazon Prime Video, India said,“We are thrilled to present Four More Shots Please!, a female-centric story of four urban Indian women, their life choices, their crises, romance, high points, helmed by their rock-solid, life-saving friendship. We have worked with a strong, female-led task force – right from the cast to the crew. Four More Shots Please! reflects the voices of the generation of Indian women who are independent in mind, body and thought.” “It’s a story that hasn’t been told yet in India and we’re glad to have the perfect partners in Pritish Nandy Communications bringing this series to fruition. Rangita Pritish Nandy’s vision and Anu Menon’s direction has truly transformed the story into a must watch series that is very entertaining and relatable to all our customers,” he said. Pritish Nandy, Chairman, Pritish Nandy Communications said, “Four More Shots Please! is our tribute to our times. It’s about a generation of young women, brave and vulnerable, independent and spirited, growing up in South Bombay and speaking the language of our times, living the life they yearn to live with courage, conviction and confidence. Four friends who share in each other’s joys and griefs, successes and occasional losses with love, fortitude and delight. It’s a funny, exciting, magical show full of wit, humour and insight into a generation that refuses to take itself for granted.” “Rangita, creator of the show and Anu, director for the first season, take you on a roller coaster ride through the lives, loves and ambitions of these four women who choose to take the road less travelled by. And yes, there are some great guys too on the show. They will take your breath away for they are today’s New Age men. So no, it’s not just a show about women. It’s all about us and our wonderful times. It’s about liberation from the past,” Pritish said. Written by Devika Bhagat, with dialogues by Ishita Moitra, ‘Four More Shots Please!’ revolves around the lives of four very different women each fighting their own individual battles and tackling life as it comes. Based in the southern tip of Mumbai, the city that never sleeps, these four friends get together every couple of days to binge talk and get smash drunk at their favorite garage bar, ‘Truck’. It’s the magic of pure, unadulterated and yet sometimes flawed, friendship. ‘Four More Shots Please!’ is the urban, millennial Indian woman's gaze, a slice-of-life, brutally realistic portrait of what it is like to be in a country caught in a constant battle between the traditional and modern, to be a thinking woman, to be free in a country caught up in chains and to be honest in a country that thrives on hypocrisy. The Prime Original stars Sayani Gupta, Kirti Kulhari, Bani J and Maanvi Gagroo as these four women along with a stellar ensemble castcomprising of Prateik Babbar, Neil Bhooplalam, Lisa Ray, Milind Soman, Amrita Puri and Sapna Pabbi. Replete with pop cultural references, ‘Four More Shots Please!’ is the one thing you need to watch to get into the mind of the modern Indian woman.