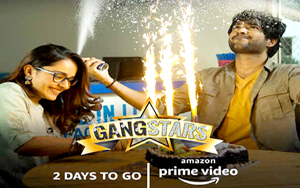 New Delhi, Amazon Prime Video on Wednesday launched its first Telugu Prime Exclusive series in India, GangStars. Produced by Silly Monks Entertainment and Early Monsoon Tales (a web division of Vyjayanthi Movies), the series brings together some of the best talent from Tollywood. Starting June 1, 2018, GangStars will be available in Telugu, Tamil and Hindi exclusively on Amazon Prime Video. The series stars Telugu superstar Jagapati Babu along with seasoned actors like Navdeep, Shweta Basu Prasad, Sidhu Jonnalagadda, Apoorva Arora, Posani Krishna Murali and Sivaji. The 12 episode binge-watch series, GangStars, brings together the cinematic experience of a film, with the quintessential Telugu style of movie-making. With overtones of comedy, this fast-paced series promises great performances by a talented cast. A Gangster, a Superstar, a Diva, a Newbie Producer, a Struggling Director and a Blockbuster Producer - all come together in this laugh riot titled GangStars. This comedy caper is set in the film industry backdrop and involves two movie stars, two ex-lovers, and one gangster. How one incident sets up a chain of events in motion and interconnects the lives of all these characters, interspersed with a murder is the intriguing crux of the narrative. Sanjay Reddy, Managing Director, Silly Monks Entertainment and Swapna Dutt, Managing Partner, Early Monsoon Tales, when talking about the show said, "We are thrilled to collaborate with Amazon Prime Video to create one of the first exclusives on the service in a regional language. With a strong story line, credible directors and producers and an all-star cast, we believe, the audience will love what we have in store for them." Jagapati Babu said,'GangStars has something for everyone - a blend of drama, thriller and comedy! It has a great script and I have complete faith in the director, producer and Amazon Prime Video; for bringing the vision of this show to life. After Legend, this is one of my most memorable projects and I hope audiences love the show as much I loved being a part of it.' "While cinema remains my first love, I know that the digital wave is taking India by storm. I'm happy to be a part of GangStars, a series that will truly bring Telugu content to the fore. My character is that of a difficult actress and I'm happy that I've managed to portray a variety of emotions. GangStars has truly brought out the diva in me,'Shweta Basu Prasad said. Navdeep said,' GangStars is a fast paced series that personifies the essence of Telugu cinema. It's fun, energetic and most of all, super entertaining! The team has come together wonderfully to create this masterpiece and I'm sure audiences from across the country will enjoy it!"